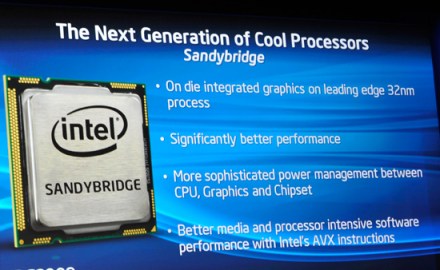 Intel hopes to shake up the computer chip market as it unveils details on Monday about how it is putting a microprocessor and graphics processor onto a single silicon chip.

Code-named Sandy Bridge, the chip will figure prominently in the keynote speech of Intel chief executive Paul Otellini, who kicks off the Intel Developer Forum event in San Francisco on Monday.

The processor-graphics combo chip is available in prototypes now and will ship to customers in early 2011. It will target low-end desktop computers and laptops, and could cause a big headache for Nvidia, the maker of stand-alone graphics chips. 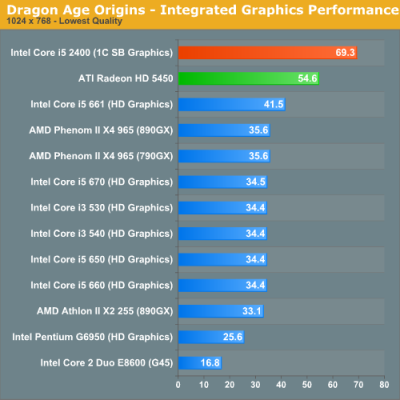 Intel launched a combo chip last year that glued together two chips in a single package. But Nvidia laughed that chip off as brain-dead when it came to running the top 30 computer games. But this second-generation effort, Sandy Bridge, combines the two chips into one and poses a greater threat to Nvidia. Anand Lal Shimpi, a noted hardware reviewer at Anandtech, said he thinks entry-level GPUs will be unnecessary in the wake of Sandy Bridge’s introduction. (See Anandtech chart at right, which compares the performance of existing Intel-compatible integrated graphics chips, where a graphics chip is combined with a chip set).

“Is it enough to kill all discrete graphics? No,” Anandtech wrote. “But it’s good enough to really threaten the entry-level discrete market.”

One of the reasons Intel can do this is Moore’s Law, the notion formulated by former Intel chairman Gordon Moore that says chip performance doubles every couple of years. As it makes circuitry smaller, it can fit more electronics onto a chip, improving performance. By moving to a new generation of manufacturing technology, Intel can combine a capable microprocessor (with four cores, or processing brains) with a decent graphics component.

Intel’s Otellini said during the company’s recent earnings call that Intel was accelerating its investment in new 32-nanometer manufacturing technology because of strong demand from PC makers. Meanwhile, Advanced Micro Devices is preparing to launch its own hybrid chips, under the Fusion brand name, early next year.

Nvidia, meanwhile, continues to be a naysayer on the capabilities of hybrid chips and is skeptical of Intel’s (as yet unreleased) performance claims.

“They are launching a faster turbo-prop in a world that has moved on to jets,” said Ken Brown, an Nvidia spokesman.

You would expect that, since Nvidia doesn’t have its own microprocessor. But the company points out that Intel’s Sandy Bridge won’t be able to run DirectX 11, which is the graphics standard from Microsoft that governs whether developers can take advantage of certain cool graphics features. Nick Knupffer, spokesman for Intel, says that Intel is working on boosting its investment in driver technologies so that it will be able to run more games with better graphics.

“Integrated graphics and standalone graphics each have their place in the market in terms of performance and power consumption,” said Dean McCarron, analyst at Mercury Research. “Both graphics segments have coexisted for more than a decade, during which the capabilities of both segments have improved tremendously. It is highly unlikely either segment will displace the other, and increasingly we have seen active coexistence, particularly in the mobile market where computer makers are configuring notebooks to make use of both types of GPUs in the same platform.”

Sandy Bridge does have some features that aficionados will appreciate, such as the ability to display stereoscopic 3D Blu-ray videos and high-definition TV. It can support the Intel Wireless Display, which can display the image on your laptop on the big screen TV in your home. And it will have high-performance transcoding, or the ability to translate video from one format to another so that it can run on just about any device.

Intel recognizes that it isn’t going to kill off the market for $600 graphics cards that hardcore gamers want. But the market trends favor its direction, Knupffer said. By 2014, about 80 percent of the PCs shipped are expected to have hybrid chips, which Intel calls Processor Graphics, according to market researcher iSuppli.

What do you think? Please take our poll.

Will Intel succeed with hybrid graphics-processor chips, or will Nvidia rule with stand-alone graphics chips?survey software