The Electronic Entertainment Expo is getting more attention than it has in a decade, according to Google’s trend-tracking tool, which keeps tabs on what people are searching for. People are looking for information about “E3” and “Electronic Entertainment Expo” at a rate that is between 60 percent and 80 percent higher than 2014. This is the highest that E3, giant industry tradeshow, has tracked on Google Trends since the site started sharing the data in 2004. The console industry is a $55 billion beast, and it has lost mindshare to mobile. But this year shows that with the PlayStation 4 and Xbox One hitting their strides and gamers digging augmented and virtual reality, traditional games remain a powerful force in the industry. 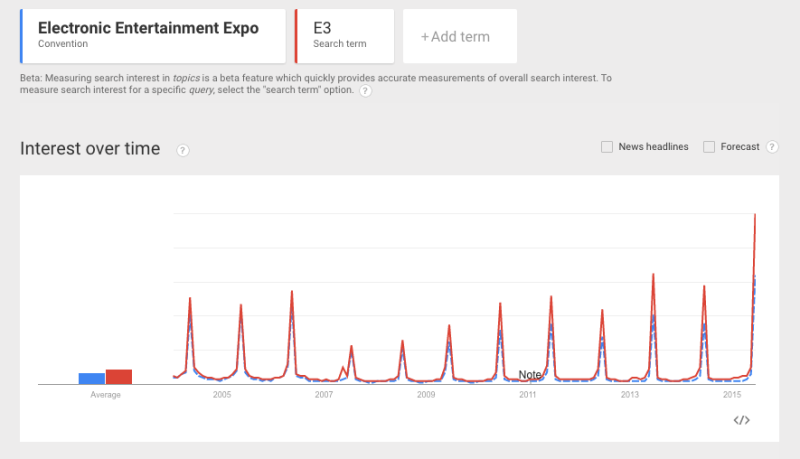 Above: Google Trends shows a huge spike in interest in E3.

But the engagement doesn’t stop with Google searches. Gamers were also tuned into Twitch and other livestreaming sites like YouTube to watch the big media event.

A spokesperson for Twitch claims the company “dominated” the space, and that was huge for every company that had a video event.

“All of the press conferences — Nintendo, PlayStation, Xbox, Ubisoft, Bethesda, and EA — averaged at least 500,000 concurrent viewers with a couple surpassing 700,000 and 800,000,” Twitch said through a spokesperson. “These numbers also don’t factor in the massive collective viewership stats which will be released post-E3.”

Clearly, gaming is still huge, and people want information on what is happening with traditional consoles and PC. That is right in line with what we’ve seen from the PlayStation 4 and Xbox One in terms of sales. Those consoles are both selling at a rate that is far faster than their predecessors. The PS4 is the fastest-selling home gaming console of all time.

That means the market is thirsty for these products, and — up to this point — the PlayStation 4 and Xbox One haven’t necessarily delivered gaming libraries overflowing with exciting new releases. Sony Computer Entertainment’s Andrew House even said that the PS4’s release schedule through the end of the year is “sparse.”

So while gamers have jumped onto the newer systems, they still haven’t had the experiences to satiate the hunger that drove the superfast adoption of expensive new hardware. And E3, with its plethora of back-to-back announcements, has likely turned into this promise that gamers from around the world can tune into with the hopes that they’ll find out about the next big thing for their favorite console.