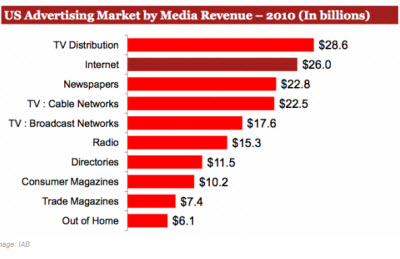 Internet advertising has been gaining on newspaper advertising for a long time, and in 2010 the new media finally surpassed the old media.

The Internet Advertising Bureau reported that full-year 2010 internet ad revenues were $26 billion, up 15 percent from 2009. The report from IAB and PwC also said that internet ad revenue came roaring back from the recession and had a strong fourth quarter. While competition for ad dollars on the internet is fierce, web sites can take heart that their medium is back to strong growth.

Fourth quarter internet ad revenues were $7.4 billion, up 19 percent from a year ago.That helped the internet beat out newspapers, which reported revenue of $22.8 billion.

But newspapers should take heart in the fact that new media have not killed off old media. Radio ads are still a $15 billion business.