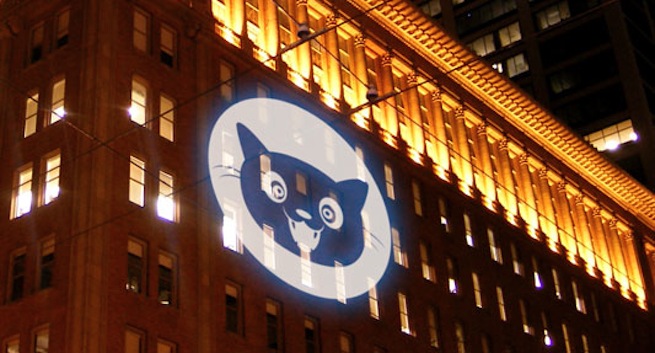 The Internet Defense League (IDL), an organization dedicated to keeping the internet open, officially kicked off its efforts today with a conference call that included several members of the tech industry and a handful of U.S. congressmen.

The group said it has set up its own version of Batman’s bat signal.

IDL members (you can sign up on the organization’s official website) will have access to tools for automatically alerting people to issues that may hinder the web’s freedom. Members can put a piece of code on their website that will contain updates on issues, send out automated messages on Twitter or Facebook, and receive e-mails. The group calls this effort the “Cat Signal,” appropriately named for the Internet’s nearly universal fascination with kitties.

“This is a call to arms for all the people who are creating something online,” said Reddit and Breadpig founder Alexis Ohanian during today’s call, adding that the Internet needs a watchful protector like DC super-hero Batman. “Whether they’ve got a Twitter account with 20 followers or a website with 30 million visitors, they all have a Gotham, so to speak, to protect.”

“The Internet, from the time it was commercialized, has proven to be a place where innovators come together, or innovate on their own,” said Congressman Darrell Issa (R-Calif.) during the call. “Had the government intervened through regulation … the Internet today would look much more like a telephone system and much less like a communications system (that is) an economic engine that has driven so many new and innovative products.”

The IDL — whose members include companies like Reddit, WordPress, Cheezburger Network, Fark, and others — was formed in the wake of successful protests by a number of groups to thwart such now-dead pieces of legislation as the Stop Online Piracy Act (SOPA) and the Protect IP Act (PIPA). The group is attempting to bring together regular Internet users, companies that build their business around the Internet, and others into a permanent coalition able to alert the community to threats to net freedoms in the future. And as VentureBeat previously reported, many IDL members have already come together to sign a Declaration of Internet Freedom.

The IDL wants to be the caped crusader for the Internet. And in keeping with the Batman metaphor, not only is the group scheduling its launch to coincide with the release of the latest Batman movie, but it’s also creating a digital version of the bat signal with its Cat Signal.

Seriously. The organization started a crowdfunding campaign to get real life Cat Signals beaming the IDL’s “cat-signal” icon onto clouds in the sky or neighboring buildings. The group has raised almost its entire $19,000 target to have these spotlights used in five different cities across the globe. Depending on how much you donate, you can even receive IDL trinkets and gear, such as a personal cat signal torch-light key chain, IDL t-shirt, stickers, and more.

Additionally, members have the option of donating money to the organization’s future efforts.

Logistics of flipping on the Cat Signal

During the call there was some discussion about how the IDL would identify each threat, as every member will likely not agree with everything the new organization deems hurtful to the web.

For instance, issues regarding net neutrality would end up being put on a case-by-case basis.

“Net neutrality is a tricky question, because a lot of people really love the idea in theory, but finding a legislative way to do it without attaching a lot of power to a group or (government) agency is incredibly difficult” said EFF’s Rainey Reitman on the call. “It would just depend on the legislation.”

The group will, however, monitor websites, including a IDL subreddit devoted to threats against a free Internet. Based on the limited discussion on the conference call, it didn’t sound like there was any standard procedure for identifying threats that would be fed through the Cat Signal, at least not for the moment.

Some IDL members, like Sen. Ron Wyden (D-Ore.), don’t foresee this as a huge problem. “Once there is an issue brought up by either the (IDL) community or through mainstream media, the public is going to drive it,” Wyden said, adding that any issue that needs to be addressed won’t be hard to identify for the organization.

For the immediate future, the IDL plans to keep its eyes on the senate version of cyber-security legislation CISPA.