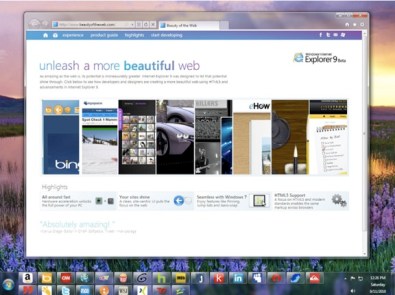 Microsoft’s long journey to revitalize Internet Explorer, and make it a competitive web browser against speedy upstarts like Google Chrome, finally reached its end tonight. A few hours ago, Microsoft made the final version of Internet Explorer 9 available on its Beauty of the Web site.

The official launch tonight marks the end to months of testing for IE9, which started with the beta release of the browser last September and continued with the launch of the first IE9 Release Candidate (the final step before a program’s final release) in February.

Internet Explorer 9 proved very popular with testers — its beta version hit 2 million downloads in its first two days, and it was downloaded 25 million times when its beta period ended. That’s a surprising amount of interest for a Microsoft browser, which tells us that the company’s big gamble to revamp IE9 — stripping away the confusing toolbar clutter from IE8 towards a more minimal design — paid off.

IE9 is a major departure for Microsoft. In addition to its minimal design, it packs in modern browser capabilities like a fast Javascript rendering engine and support for HTML5. IE9 also includes hardware acceleration for web-page rendering (it uses your graphics processor to do some of the work) — something that even geek-friendly browsers like Chrome and Firefox have yet to roll out (though it’s coming soon to both).

I’ve been using IE9 throughout its test phase and don’t really notice anything too different with the final release. For those heading into the browser for the first time, prepare to be wowed by its speed and design. Microsoft one-upped Google Chrome’s minimal design by moving the browser’s address bar right alongside its tabs, leaving even more room for web pages to shine. It’s also clear with this final release that IE9 is far faster than the latest version of Firefox (not including Firefox 4 beta releases).

Microsoft has also pumped up the capabilities of IE9’s address bar. You can perform searches from within it, but unlike its competitors, you can also view search results from within it as well. The address bar defaults to Microsoft’s Bing search engine, but you’re free to switch it to Google, Amazon and others.

The browser is fast enough to tempt power users who haven’t fully invested themselves in Chrome or Firefox. But the real value of IE9 is that it will bring the speed and features geeks are familiar with to general users. Those users will likely never get around to installing a third-party browser. At least with IE9, it’s less of a crime if they don’t.