The Internet of Things, which makes everyday objects smarter and connected, could bring electronic brains to more than 1.9 billion devices by the year 2020, according to a forecast by the tech analyst firm Linley Group.

Linley Gwennap, founder of the Linley Group, told the crowd at the company’s annual chip conference that the term Internet of Things covers a lot of ground, from smart utility meters to smart cooking thermometers, making the forecast difficult to make. Industrial devices are leading the way, but Gwennap said he expects to see rapid growth in consumer devices starting around 2017. 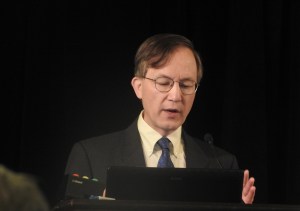 Above: Linley Gwennap of the Linley Group.

The IoT market is expected to surpass the number of smartphones in the year 2023, Gwennap said.

Moore’s Law, or the doubling of the number of transistors on a chip every couple of years, has slowed down. That has made choosing the right manufacturing process more difficult, as not every application has to be on the newest technology. Many chip applications may focus more on low power than leading-edge performance.

One of the weak spots of IoT technology is security, as connecting the devices to the Internet makes them more vulnerable to hacking. Encryption is becoming increasingly important in preventing the highly personal data from falling into the wrong hands.

That is one of the problems that has to be solved as vendors pitch more devices to consumers. So far, consumer demand has been lackluster.

Gwennap’s Linley Processor Forum conference focuses on chips that are the guts and brains of electronic devices. In addition to the IoT market, Gwennap noted the growing use of high-performance processors in cars. Replacing dumb microcontrollers, these processors are controlling graphics in dashboards and driver assistance systems. The car processor market is already a $10 billion market, and it could double in a decade, Gwennap said.

There were high hopes for the wearables category with the launch of the Apple Watch, but its poor acceptance in the first generation means that the category needs more work.

“Wearables needs a better use case, and the price needs to come down,” Gwennap said. “What can you do with them that you can’t do with your phone?”

“Ultimately, the biggest growth opportunity is in the consumer space,” Gwennap said. “Our forecast is about 10 devices per home in the 2022 timeframe. When you put that all together, that’s a big opportunity. But it will take longer to get there than people are saying.”