Michael Bauer, the original owner of Internet.org before Facebook founder and CEO Mark Zuckerberg, discovered what became of his treasured domain just like anyone else: while watching Chris Cuomo on CNN.

“I woke up this morning and saw my domain there on the ticker. I almost spilled my coffee,” Bauer told VentureBeat earlier today.

Bauer, the CEO of Brilliant Arc and the creator of the first version of MapQuest, registered Internet.org way back in 1993. While it has taken many forms since then, in its most recent iteration, the domain was a place to talk about some of the big topic issues related to the Internet — like freedom of speech, open access, censorship.

“I was always trying to hold on to it until l could find the right utilization of that name. I’ve always considered myself its caretaker,” he said.

While Bauer says he sold the domain back in April or May, the deal went through a third-party broker, which means that he never had a much of an idea of who it went to. Hence his surprise when he found out that its new owner was none other than the CEO of Facebook. (As far as price goes, Bauer would only say that the amount “wasn’t significant.”) 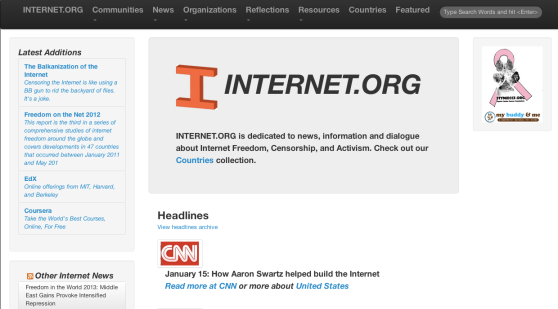 Zuckerberg’s mission for his new project, as he explains it, is to connect the next five billion people to the Internet by lowering the costs of delivering the Internet to mobile phones. And he’s not alone: Companies like Google and people like Bill Gates have also made similar attempts that idea, to varying degrees of success.

While there’s clearly honorable about such a goal, when someone like Zuckerberg steps in, it pollutes the entire vision. The Facebook CEO may have great (albeit admittedly rough) ideas for his project, but it’s hard not to see the whole thing as a transparent and perverse attempt to get more of the world on his social network. If more people get online, chances are a lot more of them are going to use Facebook.

The same goes for partner companies like Nokia and Qualcomm, both of whom are using the good will of expanding access to the Internet to obscure their less admirable financial ambitions. This is like oil companies making a social good case for why more people should own cars.

The situation is in its own way somewhat ironic: A domain that began as a way to talk about Internet censorship and open access is now owned by a guy who wants to increase his company’s stranglehold on the Internet.

Bauer, however, isn’t quite so cynical. “I’m excited about it. It’s very much in line with the vision I had for the domain from the beginning. It’s a big concept name and needed a bigger force behind it,” he said.

But while Bauer is pleased with what Internet.org has become, he also says he wouldn’t be against Facebook inviting him along for the ride. “Mark hasn’t reached out to me yet, but if he does, I’m here,” Bauer said.