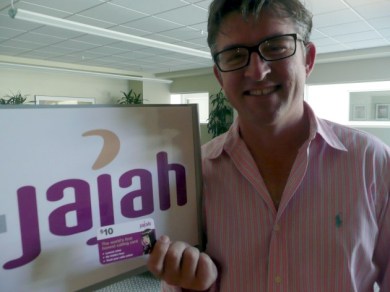 Jajah, the internet phone company that was snapped up by Spanish telecom giant Telefonica for $207 million, is declaring war on calling cards. The company is announcing today a calling card of its own that it’s dubbing “the world’s first honest calling card.”

The trouble with traditional calling cards is that you never get what you pay for. Most cards come with a variety of hidden fees and surcharges, and it’s never clear exactly how much you’re paying for a given call — no matter what the card itself says. The people most affected by these crooked cards are low-income workers who immigrate to the US and need a cheap way to call their families internationally.

Jajah’s solution is a calling card driven by its internet telephony service. The company is aiming to be completely transparent about all of the costs to customers. After buying a card, you can look up your exact balance online, or via a phone call or text message. There are no hidden fees, and since it’s using Jajah’s VoIP technology, the per-minute cost of calls are kept low.

It’s also taking the calling card to the next level by offering an iPhone application. The app will function much like a traditional calling card. You’ll be able to purchase an app with a certain amount of calling funds attached to it, as well as make calls directly from the app. Existing Jajah users can also use the iPhone app to refresh their current Jajah balance.

With its two-pronged approach, Jajah hopes to change the calling card industry for the better. The company is hoping that its cards will force the Better Business Bureau to be more vigilant about the many ways traditional calling cards rip off consumers.

It’s also being smart about how it markets the Jajah card. It’s staying out of crowded gas station calling card sections and is instead focusing on retailers like Walmart, Best Buy, Rite Aid, and Staples. Jajah will also build up a presence at immigrant community centers, community offices, and state offices to inform the low-income population on why they’d be better off using its calling cards.

The company is white labeling its calling card technology so that other companies will be able to license it and offer calling cards of their own.

Much like Dynamic’s Card 2.0, the next-generation credit card technology that won the $1 million People’s Choice Award at this month’s DEMO conference, Jajah’s calling card is a blend of old and new. The calling card industry has long needed a kick in the pants, and VoIP providers like Jajah need a way to make general consumers aware of the benefits of their technology.