Women’s viewership of esports grew from 23.9 percent of all watchers in 2016 to 30.4 percent in the fourth quarter of 2018, according to a report by market researcher Interpret. That 6.5 percent change is a considerable leap, considering the heavy representation of men in both esports audiences and professional athletes in the past.

“Changing behaviors among a large segment of people is difficult. Progress of this size always takes time; however, a [6.5 percent] gain in gender share over a two-year period is a trend in the right direction,” said Tia Christianson, the vice president of research in Europe for Interpret, in a statement. “If two years from now, the female audience grabs an additional 6 percent in share, esports viewership will be in gender parity with what we consider standard among traditional console and PC games.”

She added, “As an industry, more progress will be made as females’ role in traditional esports titles continue to grow, given the efforts from some of the industry leaders. More likely than not, a lot of that growth may come in non-traditional esport genres, and especially games tailored to mobile and tablet devices.”

Christianson said that women’s viewership has consistently gained share nearly every quarter since 2016. 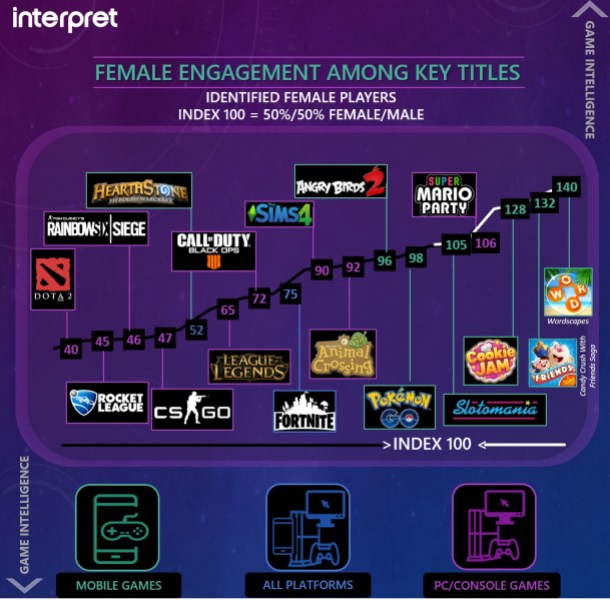 But casual gaming (defined as those who log many hours on mobile and few on PC/console) is dominated by women at 66 percent.

Interpret said the slow increase in traditional female fans of esports may be due to an increased prevalence of mobile games in
competitive gaming. According to Skillz, a platform that offers mobile competitive gaming and boasts a large selection of casual games, 7 of the top 10 mobile earners on their platform in 2018 were female.

Skillz has shown that one of the keys to increasing female participation in esports or competitive gaming may be through mobile and tablet devices, with games in nontraditional esports genres.