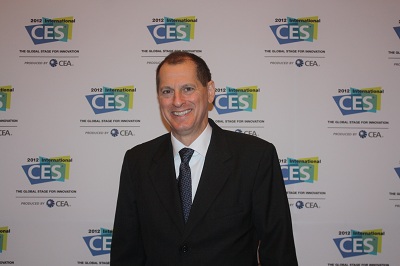 Gary Shapiro, chief executive and president of the Consumer Electronics Association, feels good about how government is jumping on the technology competitiveness issue in a bipartisan way.

But in an interview with VentureBeat on the eve of the group’s Consumer Electronics Show in Las Vegas, he said he is disappointed that the Stop Online Piracy Act (SOPA) is distracting a lot of lawmakers from the larger agenda now as they obsess over what he and many other people in the tech industry consider to be a poorly written proposal to deal with online piracy. One of its controversial provisions is that it it would force web hosting companies to shut down web sites if copyright owners make a complaint about copied content, without first obtaining a court order.

“It’s too bad that in Washington, the urgent replaces the important,” Shapiro said. “We care about piracy and so do a lot of people. But this bill is shocking, and it’s shocking it has some support. We are playing defense, and we are being outspent 10 to 1 by the copyright extremists.”

He added, “There are two types of members of Congress: those who understand the internet and those who will vote for SOPA because they have made commitments to the copyright extremists. We think online piracy stinks, but this is very bad legislation.”

Shapiro is happy that some companies like Microsoft and game companies (Epic Games) are starting to withdraw their support for SOPA, as has the Business Software Alliance. And he believes that members of Congress will listen to a groundswell of citizen opposition to SOPA as well.

Shapiro wrote a book last year entitled The Comeback: How Innovation Will Restore the American Dream. It turned into a bestseller and has drawn a lot of attention from the 536 people (Congress and the President) that it was written for, Shapiro said.

“I’m thrilled it became a bestseller and we have a bipartisan consensus on a lot of the main points,” he said.

The book raised the alarm on problems that are hurting innovation in the U.S. Those include a lack of a strategic immigration policy that allows skilled researchers to stay in the U.S., the need to improve science and math education, and heavier investment in research and development. He also argued that something has to be done about the huge deficit, which is putting the nation at risk in terms of its competitiveness.

“I”m pleased that on every major issue, we have progress and bipartisan support,” he said. “We have to tie it into jobs better.”