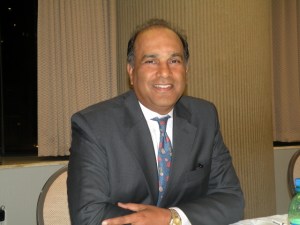 Arvind Sodhani is one of those investors who isn’t blinking. But he’s not your typical venture capitalist. Sodhani is the chief of Intel Capital, the venture arm of the world’s biggest chip maker. He just closed on a billion-dollar investment in Clearwire, a provider of WiMax broadband wireless service that has raised $3.2 billion total to create a next-generation cell phone network through a merger with Sprint. That’s just one of many bets Sodhani is placing. While other VCs may be panicking, he says Intel will keep a steady hand and invest in the best startups as it finds them.

VB: You recently closed on the billion-dollar investment in Clearwire that got started before the downturn and just closed after the downturn was underway. Did you have to have a discussion about a change in valuation?

AS: It was announced in May and had to wait for regulatory approvals, which just came recently. The valuation was agreed upon at the time of the signing, and the deal was pretty much done at that point in time. There was no valuation change.

VB: How is the downturn changing what Intel Capital does?

AS: Not much has changed on our side. We will continue to invest. My belief, shared by the CEO of Intel, is that you continue to innovate in a downturn, and innovation doesn’t stop because of slowdowns. We’ll continue to invest in technology innovation. The good news is valuations will be more attractive. I think other investors will pull back. We have heard a lot of stories about the venture capital community pulling back. Depending on the life-stage of the fund, VCs are not funding existing companies or new companies.

VB: So do you have to step forward to make the deals happen?

AS: We will continue to invest in the same manner that we always have. You will not see much of a pullback from us. But we will see a much different valuation picture. We are already seeing that.

VB: Do you have to go through some kind of triage with the portfolio?

AS: We are not as active as VCs are in redirecting startups to different business models. We help them redefine what they’re doing in light of the downturn.

VB: What are the latest numbers for your portfolio?

AS: We have 416 companies in our portfolio and the value is $2.162 billion as of Sept. 27. That does not include the $1 billion new Clearwire investment, but it did include the $600 million we already had in Clearwire.

VB: How do you feel about having so much of your portfolio in one investment?

AS: We are excited about it. It’s a network build-out in the U.S. It’s going to be the first 4G broadband wireless network being built in the U.S. Sprint, just before the closing, launched the Baltimore market successfully. They will launch one after the other.

VB: Is everything in place for the rollout?

AS: Our WiMax chip set development is on track and consistent with the development of the networks here and throughout the world. The biggest network deployments are here and in Japan.

VB: Are you concerned carriers will cast their votes with Long Term Evolution?

AS: No, we aren’t worried. LTE is two years behind WiMax. We haven’t seen any chip sets yet. There was a lot of noise about LTE three to six months ago and that has dramatically died down. I don’t see anybody making noise now.

VB: How similar is this downturn to 2001? What will Intel Capital be doing differently?

AS: In 2001, you had a technology bubble that burst, and the consequences of that bubble bursting were largely contained in the technology sector. What we have now is a very broad based decline. It would not surprise me if we saw a fairly large GDP decline in the U.S. and a prolonged recovery after that. We view this as an opportunity. We will continue to lead and not waver. We will find the good investments and help them. We are leading our deals by and large. That’s different from 2001 when we were not leading deals. We had to rely on other VCs back then. The VC community pullback will not impact us at all. It will create the opportunity to do more investments for us.

AS: I don’t have data on that. We’ll continue to invest at a similar clip as we have in the past.

VB: What is your advice to startups?

AS: Our advice to our portfolio companies was in my memo to them. They should fine-tune their business models to the new economic realities. We are likely to see a prolonged period of decline in the U.S. and other parts of the world. Portfolio companies have to adjust their projects and their spending.

VB: How much visibility is there?

AS: With respect to decline in consumption, that’s clear. It’s an accepted scenario for the U.S. Product by product, it’s harder to see. Cool new products will get positive receptions.

VB: Some analysts believe there will be a recovery in two or three quarters. Some believe it will last three years. What do you think?

AS: Companies have to finance themselves through the cycle. We will support our portfolio companies. But they have to redo the business plans based on the assumption that funding will be difficult.

AS: Not necessarily. It depends on the payback time. Network build-outs like the one Clearwire is doing are expensive. They need $2 billion or $3 billion for that.

VB: Are you still making strategic investments in semiconductor equipment?

AS: I wouldn’t say we’re obligated to doing them. But we are about promoting the strategic interests of Intel, and we will invest in the equipment companies that make sense. We need them to keep us on the leading edge of manufacturing.

VB: Are you optimistic about the cleantech initiatives in the works for the Obama administration? Some of the ideas being floated include bigger investments in cleantech where private industry falls short.

AS: There are different ways for the government to incentivize investment. In this environment, that’s an important thing for the new administration to do. Stabilizing the financial system is step one. Step two is to help the recovery.

VB: Paul Otellini, your CEO, has said the market downturn is the worst he has seen. How do you view it?

AS: I wouldn’t add to that. It isn’t appropriate for me to provide more detail. We have had a near collapse of the financial system. Clearly this is a most unprecedented situation. Our advantage is we don’t have to raise a fund. We aren’t driven by the need to raise funds, redemption requests from our limited partners, or a refusal by our limited partners to meet their capital calls. Those are problems for VCs.

VB: Is your money invested in a quarter correlated to revenue in the quarter?

AS: No. We are a strategic investor. It’s a combination of strategic need and opportunity.

VB: If you take WiMax out, what is your biggest bet?

VB: What’s going to get us out of this mess?

AS: Innovation. New products, new services, exciting and cool things. That’s the formula for the technology sector to emerge again. My message for my crew is that 2009 will be an exciting year for us to invest in the right strategic companies and to help our portfolio companies through a very difficult period.