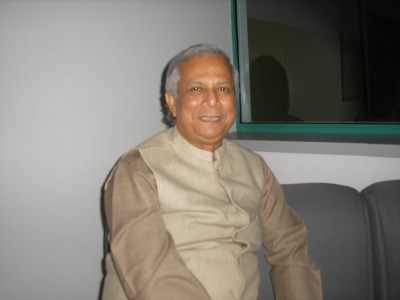 Muhammad Yunus had the vision 32 years ago to create a social business. A Bangladesh professor, he was appalled by the country’s poverty. He made a loan to a group of poor villagers. They used the money to start businesses and paid him back. So began “micro credit.” He turned the idea into Grameen Bank, which has made small loans to more than 7.5 million people now.

Yunas received the Nobel Peace Prize in 2006 for his work, which has inspired many similar social businesses worldwide, such as Silicon Valley’s own Kiva. Yunus received a “global humanitarian” award from the Tech Museum Awards and said in his acceptance speech that his company has made more than 700,000 housing loans at $300 each to poor people to buy homes. And, he noted, “We never had a subprime crisis.” The poor, he said, have turned out to be a better credit risk. “I am a banker who is at peace,” he said. Here is our interview with Yunus.

VB: Can you explain the origins of micro credit and how far it has come?

MY: It started in a small village in Bangladesh in 1976. I took $27 from my own pocket and made a loan to 42 people. I tried to solve a problem by linking the people with a bank so that they wouldn’t have to go to loan sharks. The banks said no. It cannot be done. So my battle began. I thought that was an unreasonable statement. I offered myself as a guarantor for the bank. I’ll take all the risk. You give the money. That worked. People were paying back. I got very encouraged and expanded it many times. But the bank was not very interested. They said it was a matter of time. This whole thing will collapse and nobody will pay it back. Seeing their reluctance, I thought maybe I should create a separate bank. I became so convinced something could be done. It was a long struggle. Finally, I got it done. We called it Grameen Bank, or “village bank.” It expanded. Now it’s nationwide, with 7.5 million borrowers. About 97 percent make their payments. The borrowers own the bank. The bank makes a profit and it goes back to the owners. There is no collateral. No lawyers. Nothing. It’s a very different kind of banking. It has spread all over the world. There are 130 million people globally who have been reached with micro credit. There are billions more who need it.

VB: In the age of the Internet, technology can make it spread even farther.

MY: Technology can do miracles. Take the case of a cell phone. The power of a cell phone alone. It can revolutionize the whole banking system, the credit system, healthcare. It can bring marketing for products, payment systems, transfer of funds. All kinds of things. This is such a powerful little gadget. It can become more and more powerful. We are just scratching the service. We are opening the flood gates.

VB: Social entrepreneurship has been very popular in Silicon Valley. I wonder what you think of venture capitalists coming into the social realm?

MY: The issue I have been raising is social business. Social entrepreneurship is much wider terminology. That’s even beyond financial. On the financial side, it could be non-governmental organization activity. It’s important for people to express themselves in a creative way. But what I’m suggesting is a different thing. To create a new concept of business. I call it social business because it is business. It is a cause-driven business, and that’s why it’s social. It’s a non-loss, non-dividend company. It’s a company, but the owners don’t take any profit out of it for their own benefit. They can take back their investment money — nothing more than that. The entire reason for creating it is to solve a social problem. If you add this into the mix, then we will have two types of business in the market. Each is based on a certain aspect of human life. Profit-making businesses are the only ones that exist now. It’s based on the selfishness of people. Everybody wants to have things come to them via business. The second one I am proposing doesn’t exist now. It’s a social business where others benefit. Nothing for me. My purpose in creating it is to make a difference in the world. Once we have these two types of businesses in the market, then all of the excesses of profit-making business can be contained. Like the present financial crisis. Everybody has said it is because of an excess of greed, to the extent the market is turning into a gambling casino. Those can be balanced by the social businesses. Social business can address all of the problems that are never addressed by the profit-making businesses: healthcare for poor people, poverty, diseases, housing for the poor, slums, street children, environmental degradations. We are so busy making money we don’t have time to pay attention.

VB: So social business is a hybrid of philanthropy and capitalism?

MY: Philanthropy is different. That is giving money away for a cause. Social business is not giving it away. I take it back. I create a business to solve a social problem. Business means it recycles. Philanthropic money has only one life. Social business money has an endless life. You can transform your objective into a social business purpose and use the same money. You get much more in return. You create an institution. You create a company. The problems that are not touched by profit-making businesses are relegated to the government in socialism. If there is a slum, government should take care of it. Now we say, we can handle that too.

VB: How do you look at new micro-credit companies like Kiva in Silicon Valley, (which is generating a million dollars every seven days in $25 micro loans to entrepreneurs in developing nations)?

MY: They are a wonderful group of young people who are solving problems with a brilliant way to do it. I admire them. It shows how much selflessness people have.

VB: Is that just the beginning?

MY: I’m sure it’s a beginning. This is only one direction. They may add more pieces and have many more kinds of things that are happening.

VB: Do you think the micro credit model thrives during economic turmoil?

MY: Don’t you think that it will be much more important during the turmoil? People will be losing jobs. They will need to create their own jobs rather than sit and wait for welfare to come. They can get loans and do the jobs themselves. They don’t have to work for someone else.

VB: What do you think about the awareness of micro credit?

MY: It is much much wider now. It’s a global phenomenon. The Nobel Peace Prize has drawn a lot of attention. People are wondering what is it and what [I did]. It made it visible. The Nobel Prize puts you in the floodlights of the world and gives you credibility.