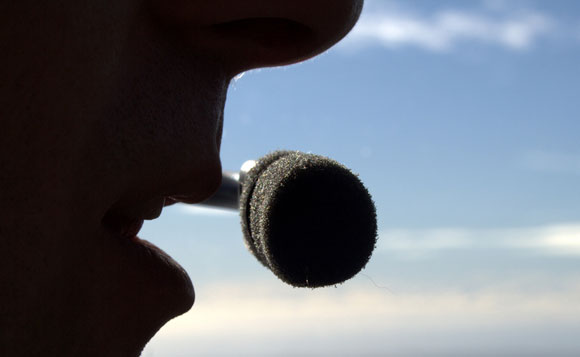 The company has identified  four main problems with teleconferences. First, of course, there’s dealing with the conference number itself, and then the authentication PIN number. Then there’s the problem of determining who is on the call, and the related issue — particularly on conference calls with larger groups — of knowing who is speaking. And finally, there’s the noise that inevitably interrupts when too many people are on speakerphone, or are taking the call in a busy location.

UberConference allows teleconferencers to dial a number (no PIN required), see who is calling in, and determine who is currently talking. The organizer can instantly tell when one or more participants are causing feedback or noise, and mute them. The organizer can even cut select participants out of sections of the call (UberConference calls it “earmuffing”) if needed for confidentiality reasons.

A particularly helpful feature is the ability to click on a participant and see their social overview, taken from popular networks: LinkedIn, Facebook, Twitter, and Google+. That’s a feature I’ve wanted often enough on calls with participants from multiple divisions or companies.

Currently, UberConference is free, but in the future the company will “offer a premium version of the service with more features and different pricing options.” The interface is simple and gorgeous, although you wonder how well it would scale for very large conference calls. 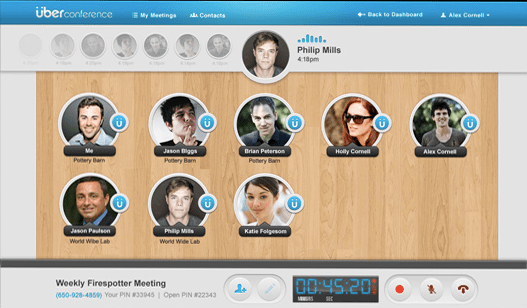 Walker is a serial entrepreneur. After selling GrandCentral to Google in 2007 for around $50 million, turning that service into Google Voice, and then spending some time as entrepreneur-in-residence at Google Ventures, Walker left Google in mid-2011. He has not gone far, however; the incubator behind UberVoice, Firespotter Labs, is funded by Google Ventures.

GrandCentral was not Walker’s first internet telephony service, nor his first sale to an internet giant. Walker also ran DialPad in in the early 2000s, selling it to Yahoo in 2005. Obviously he can’t stay away from the telephony space.

Here’s a humorous look at the rational behind UberConference:

And, a more sober overview of the service itself: