According to its website, Wine.com is majority owned by Baker Capital, a firm that claims to have $1.5 billion under management.

Wine.com soaked up close to $75 million in venture funding in a decade, but it has struggled to make money over the years, given the high marketing and shipping costs of selling wine online.

The news was first reported Monday by Growth Capitalist reporter Teri Buhl. Unnamed sources told Buhl that the company has failed to receive any offers and that Credit Suisse would handle the sale. Buhl also reported that bankers have little more to sell than a domain name.

That Wine.com could be acquired for peanuts is plausible; a source told me that the company’s most reliable revenue model involved selling gift baskets. However, with rumors circulating that Wine.com is looking for a buyer, it’s also possible that interested parties are intentionally looking to drive down the price. In addition, the company announced it was on steadier footing in 2009. 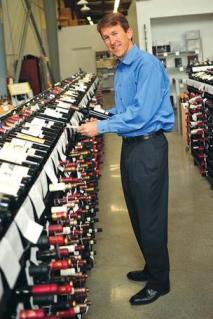 Above: Wine.com CEO Rich Bergsund says the company has “hundreds of thousands of happy customers.”

CEO Rich Bergsund denied that Wine.com was worth little more than a domain name, even joking that he would “be the first to buy it” if that were true. He joined the company in 2006 to see the company through a financial turnaround.

Bergsund stressed to VentureBeat that Wine.com is on an upward trajectory. “We turned cash positive in 2009, did $75 million in revenue in the last year, and are growing in the double digits,” he said.

Bergsund would not comment on speculation that an acquisition is on the table.

The tale of Wine.com’s history, its numerous recapitalizations, and its executive shakedowns, is perhaps best shared over a Merlot. VentureBeat‘s Matt Marshall once called it a “never-ending opus.”

Silicon Valley entrepreneur Chris Kitze acquired Wine.com and its customer list from Sand Hill Capital for just $3.3 million a decade ago. It was a good deal, given that the previous founders had been forced into bankruptcy.

Kitze brought on a seasoned CEO in 2004, George Garrick, who experimented with new business models for shipping and selling wine online. Over the next few years, Wine.com raised millions in multiple financing rounds. Kitze closed partnership deals with online retailer giants like Amazon.com, but revenue was more difficult to come by than expected.

“It’s a difficult business to make money at scale,” Garrick said by phone Monday. “Wine is heavy, and it’s expensive to ship it,” he continued, adding that some competitors would operate illegally to sidestep interstate transportation laws.

Shortly after assuming his role, Garrick convinced Baker Capital to invest. The firm agreed to put in $17 million at an attractive valuation. As part of the terms of the deal, Baker would have 35 percent ownership, two board seats, and veto rights.

Signing the deal would be one of the greatest’s errors of Garrick’s career.

In 2005, the executive team agreed that Liberty Media would acquire Wine.com for an impressive sum, $75 million. But Baker Capital reportedly vetoed the deal, and the firm’s lawyers would later claim that the offer was downsized to $67.5 million. The company was forced to take a cram-down financing deal from Baker, a source told me, and Garrick left the company out of protest.

“My job is to be the CEO,” Garrick told us back in 2005. “I can’t do that job if a single controlling shareholder is going to use their voting rights to further their own interests at the expense of other shareholders by unilaterally overruling decisions that the board and the management team have made.”

He hopes to pass on a lesson. “My advice to entrepreneurs would be to never again do a deal where one investor has the rights to block a majority vote from the other investors,” said Garrick today, reflecting on the deal.

Meanwhile, Kitze was effectively bought out, which led to a protracted lawsuit.

With litigation dragging on for over three years, Baker’s reputation took a blow. The firm was referred to by anonymous commenters as the “possibly the worst VC that ever existed” on TheFunded.com.

The firm’s founder, John Baker, still serves as a board director, according to Wine.com’s website.

Kitze has agreed to avoid speaking to the press on the company’s trials and tribulations. But he did say that it’s “sad and unfortunate” story and if the company sells for single-digit millions, employees will likely lose their jobs.

“That number implies that whoever is buying it will shut it down,” he said.