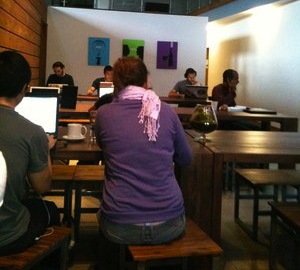 Six startups are graduating from IO Ventures, a San Francisco-based incubator. Five out of the six companies had already launched, but now they’ve also wrapped-up the four-month training period and presented tonight to an audience of investors and journalists.

Befitting its location in the Mission District, where (according to the stereotype) most companies spring up in coffee shops, IO Ventures is itself located in a coffee shop. There are really three sections to the office — a second-floor loft where the incubated companies work, a first-floor area where entrepreneurs can rent desk space, and the just-opened coffee shop, called The Summit.

IO Ventures’ terms sound similar to other incubators like Y Combinator. It invests $25,000 in your company, provides working space and mentorship for at least four months, and takes an 8 percent stake in each startup.

Here’s a list of tonight’s six demonstrating companies. They’re listed in the order they presented in. My favorite was Appbistro, followed probably by Damntheradio.

Appbistro — A marketplace for business applications on Facebook, including user reviews and a payments service. The company says 25,000 applications have already been installed through its marketplace, and it’s earning $5,000 in monthly revenue (it takes 30 percent of the purchase fees). It also just announced the Appbistro AppStores program, where other application platforms like Constant Contact and Twilio can customize Appbistro to create their own app stores.

SocialVision — A tool for publishers to add chat capabilities to their videos. SocialVision is testing out the functionality on a site called YouTube Social. The company says users spend an average 12 minutes per session on YouTube Social, compared to 6 minutes on YouTube proper. It’s also supposedly working with DirecTV on proof-of-concept tests.

Anomaly — A company that tries to uses algorithms to determine what’s most relevant in a stream of content. Its first site is The Cadmus, which sorts your Twitter stream by relevance.

Damntheradio — A service that helps businesses and brands design campaigns that reward users for promoting products on social networks. For example, a band could offer a free song to listeners who post a Facebook update about their new album. The company says it already has 2 million active users, and its clients include Sony Music, Wrangler Jeans, and the Dave Matthews Band.

Skyara — A not-yet-launched marketplace for finding activities. The goal is to help people find exciting activities that are off the beaten path. If you know how to bartend, you could offer to train someone, or if you’re a good kayaker you could take someone with you. The people offering activities will be able to accept payment, a charity donation, or just help out for fun.