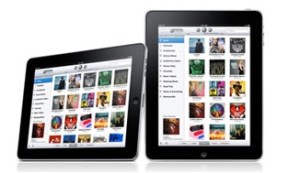 The iPad 3 will run on the next-generation wireless networks called long-term evolution, or LTE, according to a report by Bloomberg. This lets Apple’s iPad keep the marketing edge against Android tablets.

Some manufacturers of Google’s Android-based tablets are hitting the market first with LTE. But overall, if the iPad gets LTE support by March, as expected according to these reports, Apple will have completed a checklist of extremely compelling features for the device — at least if you believe the reports leaking out in recent months. The iPad reportedly will sport an amazingly enhanced high-definition screen produced by Sharp (it will be a 2048-by-1536-pixel resolution, according to one rumor). This lets Apple’s iPad keep up with higher resolutions manufacturers are producing for Android tablets. The iPad will also run on a faster quad-core A6 processor that lets users jump faster between applications, and will have better front and rear cameras, according to the reports.

True, it may be a little silly to compare the iPad with Google’s tablets, as if this was really apples to apples. It’s not. Many consumers have essentially made their mind up. For example, even though Google’s Android-based tablets are hitting market first with LTE, and may offer this or that little additional bell or whistle, there are a ton of Apple fanatics who simply don’t care about Android.  There are just too many Apple features they’re already in love with, and they’re hooked by Apple’s focus on delightful design and user experience. And vice-versa. There are Android fans, who just don’t want to buy into Apple’s slightly more closed ecosystem, and will buy an Android tablet over the iPad any day. So really, no one is going to win this battle over a slight technology edge.

Those religious differences aside, if you’re looking as simply a technology comparison, the latest LTE move gives the iPad an edge overall. If the iPad can boast at least a close match to any given Android tablet in the main spec areas (screen resolution, speed of processor, speed of network, app offering, etc), it wins, simply because it doesn’t suffer Android’s big “fragmentation” problem. Each manufacturer of an Android tablet can come close to matching an iPad’s offerings, but each one of them use a different version of Android’s OS, a different chip manufacturer, a different network configuration, and a different set of agreements with carriers about its deck, different marketing campaigns. It just creates confusion around branding. Each manufacturer dilutes attention from the other. Cheaper, poorly performing versions of Android tablets detract from its allure. Overall, Apple is left sitting there able to boast that it consistently offers best in class with its iPad.

That’s why the move to LTE is so important for Apple’s iPad. Of course, the questions are now focusing on the iPhone, and when Apple will support LTE for that device. Carriers such as Verizon Wireless and ATT are rolling out LTE networks to give users faster access to data, and so the networks are there. But Apple is bringing LTE to the iPad before the iPhone because the tablet has a bigger battery and can better support the power requirements of the newer technology, the Bloomberg report said.

According to the Bloomberg report, Apple’s manufacturing partners in Asia started ramping up production of the iPad 3 this month and plan to reach full volumes by February.