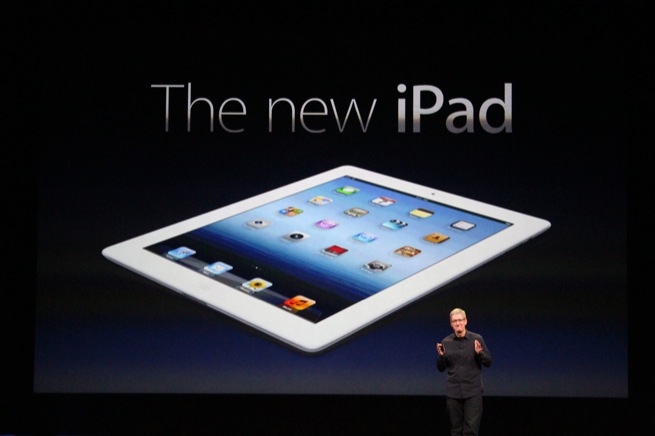 Applications for the third generation iPad are getting bigger. That means even you, users of lesser iPad models, will have to give up storage space to support the tablet’s new high-def screen.

When the next iPad is released to the hounds on March 16, it will come with a fancy new display, twice the resolution of its predecessor. The screen is 2,048 by 1,536 pixels, with 264 pixels to an inch, which makes for much crisper image details. Because of this, apps are getting a graphics boost, meaning the apps are getting significantly bigger.

“The applications developed by Apple have been upgraded to support the Retina Display. For example Keynote was previously only 115MB but its latest version is 327MB. Numbers is up from 109MB to 283MB, Pages moves from 95MB to 269MB, and iMovie from 70MB to 404MB.”

That’s a huge increase and a potential suck on data storage in even the newest 16GB iPad. Because Apple wants apps in the App Store to work universally with any of its mobile devices, the company isn’t going to make an exception for the new display. We checked the App Store to see if the Pages app had actually increased to 269MB, and indeed it has.

It wouldn’t make sense for Apple to release applications that work with older iPad models, of course. The point is to push consumers toward the newer technology. That’s the same reason older Mac computers only accept operating system updates until their technology doesn’t make the cut anymore. But even if you leap for the newest iPad, storage on even the 16GB version is going to become precious.

The tablet’s display is causing ruffles in its supply chain as well. The Wall Street Journal’s sources are saying iPad display provider Sharp has been left out of this first shipment of tablets. Sharp was reportedly unable to meet Apple’s criteria before the shipment deadline but is continuing to make the screens for the next round, according to the Journal’s sources. Apple’s other two display producers, LG Display and Samsung, seem to have come through, despite some early delays from LG.