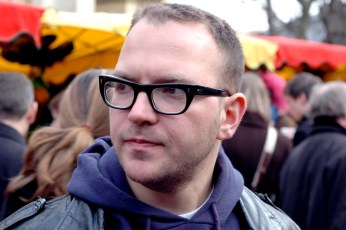 Cory Doctorow, author of Down and Out in the Magic Kingdom and many other sci-fi novels and short stories, is also known as the in-house crusader against copyright and other intellectual property laws on the quirky blog Boing Boing. Doctorow has a following, so it matters when he publishes a detailed manifesto arguing that tomorrow’s iPad launch is in many ways a reversal of values that once made Apple special.

I was a comic-book kid, and I’m a comic-book grownup, and the thing that made comics for me was sharing them. So what does Marvel do to “enhance” its comics [on the iPad] ? They take away the right to give, sell or loan your comics.

The device itself: clearly there’s a lot of thoughtfulness and smarts that went into the design. But there’s also a palpable contempt for the owner. I believe — really believe — in the stirring words of the Maker Manifesto: if you can’t open it, you don’t own it. Screws not glue. The original Apple ][+ came with schematics for the circuit boards, and birthed a generation of hardware and software hackers who upended the world for the better.

The way you improve your iPad isn’t to figure out how it works and making it better. The way you improve the iPad is to buy iApps. Buying an iPad for your kids isn’t a means of jump-starting the realization that the world is yours to take apart and reassemble; it’s a way of telling your offspring that even changing the batteries is something you have to leave to the professionals.