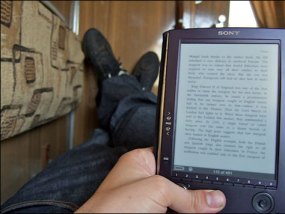 Even as Amazon battles with publishers over e-books for its Kindle reader, and Sony prepares to sell its Reader in Japan, China and Australia, research from a telecommunication and media analyst firm says the market for mobile broadband e-readers such as these will peak in 2014, when consumers worldwide will buy 14 million of them.

After that, the firm’s report says, sales will begin falling as multi-purpose devices like Apple’s iPad, plus improved smartphones and netbooks that are e-book friendly, begin to replace one-function readers. More surprisingly, the report forecasts that cheap readers built without wireless broadband networking will chew off a significant portion of the market.

“The current absence of an obvious subsidy model for mobile network operators, the launch of the iPad and market dynamics are likely to limit the market in the long-term,” wrote analyst Gavin Byrne in a report prepared by London-based firm Informa Telecoms & Media.

By market dynamics, Informa means that e-readers will be squeezed by two different types of competition. The most obvious are “multifunctional devices such as mobile phones, tablet computers, netbooks and other portable consumer electronic devices” including the iPad.

The other competitor forecast by Informa is more interesting: Byrne predicts a rising market for non-connected readers, which will read books from a memory card or a PC (via cable or Bluetooth wireless) rather than downloading them over a broadband wireless network. These gadgets will be significantly cheaper, since they won’t need wireless networking hardware and software. That raises a good question: Is the Kindle, with its built-in cellular data modem, overbuilt?