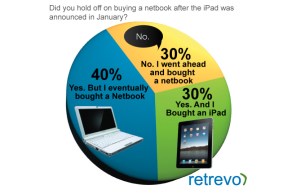 Nearly one in three buyers who had been considering a netbook waited for, and then bought, an Apple iPad tablet instead, according to a survey of more than a thousand US consumers spread across gender, age, income and location demographics. The study was commissioned by consumer electronics review site Retrevo.

The stats come soon after industry analysts declared that the iPad’s debut had shut down the buzz for netbooks. Buyers, the analysts said, mostly bought netbooks because of price sensitivity during an economic downturn. (I paid $29 for mine.) The iPad, they say, has provoked Americans’ gadget lust enough that they’ll pay extra for one.

Retrevo asked people who had been considering buying an iPad or a netbook last year: “Did you hold off on buying a netbook after the iPad was announced in January?”

Of people who like netbooks, the features they find most attractive are:

Too bad Retrevo didn’t ask if they like Flash.