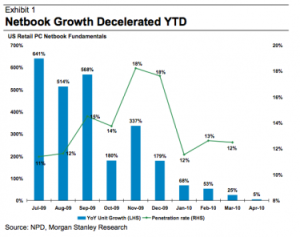 Apple’s iPad announcement and launch have spawned two trends that lack sufficient data to confirm or deny them, but are hot topics for exactly that reason.

The first is that more gadget makers may revert to building their own chips, as Apple did, rather than buying from Intel or another maker. This trend comes even as Intel rolls out a new line of Atom Z6XX CPUs that can be customized for individual products by Intel’s clients.

The second is that netbooks, the sub-$500 laptops that many consumers (including me) had bought to save money during the stomach-churning recession of 2008 and 2009, can’t compete with a touchscreen tablet for lust factor. As a result, some professional industry analysts feel that tablets and super-duper-phones will replace netbooks as consumers’ next purchases.

Journalist Philip Elmer-DeWitt, who has covered computers since he joined Time magazine in 1979, has pulled together a few choice quotes that lay out what he basically says is a not-yet-measured but easily-spotted trend: Netbook growth has fallen off sharply. Elmer-DeWitt includes a chart of data from NPD and Morgan Stanley analysts that shows how last July, the annualized growth rate for netbooks was 641 percent. This past April, only 5 percent.

Sure, netbooks have real keyboards and trackpads, can be plugged into printers and projectors, and run a more powerful, flexible operating system than the iPhone OS inside the iPad. But there’s something about them that says “I’m broke.” The slightly-to0-small keyboards and screens. The cheapo batteries that don’t last. The you-get-what-you-pay for build quality.

A year ago, it would almost have been uncool to flaunt an $800 iPad 3G in front of friends who couldn’t find work. Now that hiring and spending have begun to swing upwards again, netbooks remind me of Detroit’s downsized automobiles of the late 1970s: Everyone can understand why they were built, but no one gets excited over them.