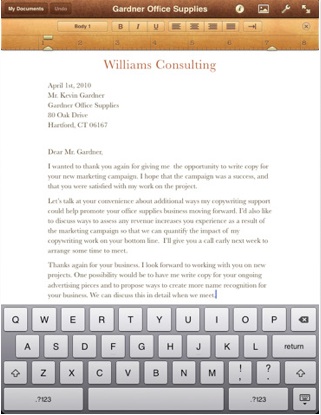 One of the recurring themes in articles I’ve read and conversations I’ve had about the iPad is that Apple’s new tablet is a device for consumption of media, not its creation. I don’t think that’s entirely fair, but I have to admit my early experiences support that idea.

I’ve had the iPad since Saturday morning, and I’ve used it constantly — for the novelty factor if nothing else. Whenever I turn it on, I keep telling myself that I should try to do something productive. Then I find myself reading old Fantastic Four issues on the Marvel Comics app or playing Für Elise on Magic Piano instead. Sure, part of that is because I’m lazy. But it also seems like the fun apps do a much better job than the serious ones of using the iPad’s interface.

The Mail application, for example, doesn’t offer much that you can’t find in the iPhone version — it gives you more space to read your email, multiple columns so you can see a list of all your messages while reading one of them, and a larger keyboard so it’s a little easier to type. But it still lacks the flexibility and ease of using Gmail on my laptop, so I use it for quick checks, not writing long messages. Just like my iPhone.

Or take the Pages word-processing app from Apple, which costs $9.99 and has been highlighted in the company’s promotional materials. I decided to buckle down and write this post in Pages, but immediately ran into problems. On the positive side, in landscape (widescreen) mode, the keyboard is sized adequately, and the lack of physical feedback when I hit a key doesn’t bother me as much as I expected. However, there’s no convenient rest position, because I can’t lay my hands on the keyboard without hitting all the keys.

And it’s hard to situate the iPad in the right relationship to my body for typing. At my desk it feels a little too high, like I have to peer over my hands to see my words on the top half of the screen. Sitting on the couch, the device sits awkwardly on my lap, and I have to hunch over it uncomfortably.

These are not critical flaws — after all, I managed to finish this post. But compare that to the different reading applications like iBooks or the Marvel app, where the interface is super-slick and easy to use. I would be interested in reading books on the iPad, because the experience, while imperfect, is in some ways better than a physical book. Writing, on the other hand, is slightly worse than a normal computer in almost every respect.

So yes, I can work on the iPad, but I can’t think of any situation where I’d want to. It would always be easier to whip out my laptop. I’m hoping that changes in the months to come, as developers become more acquainted with the device. I bet the really smart ones will come up with something completely new, rather than kinda-sorta replicating features that work better elsewhere.

What kind of productivity apps would take full advantage of the iPad? Discuss in the comments.