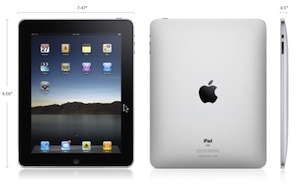 Even though the South by Southwest panel’s title asked, “Could the iPad have saved Gourmet?” it wasn’t until the session’s closing minutes that someone finally mentioned the now-defunct magazine. That’s when an audience member asked the speakers to actually answer the titular question — specifically, if publisher Conde Nast had offered Gourmet on Apple’s iPad, how many copies would it need to sell to keep the magazine alive?

“That’s kind of an unanswerable question,” said Jacob Lewis, co-founder and chief executive of Figment, a company working on a mobile platform for reading and writing young adult fiction.

The difficulty lies in the fact that magazines make their money from advertisers, not newsstand sales and subscriptions, said Lewis, who also spent 13 years as the managing editor of The New Yorker. Web advertising is where magazines are taking a huge hit, because they are used to selling advertisers “kind of an illusion” of who their audience is, an illusion that’s hard to maintain when content is accessible to everyone. Traditionally, the purchase price is basically “a gimmick” to convince advertisers that the magazine is reaching a specific audience.

So barring a complete shift in Conde Nast’s business model, Lewis said the real threshold isn’t how many issues were sold, but how much advertisers are willing to pay.

“Will the iPad save advertising?” Lewis asked. “That’s a hard thing to say.”

Still, the two panelists saw some hope in the device’s arrival. Actually, the fact that the panel was happening at all is a reflection of the iPad’s promise. Mediaite Editor at Large Rachel Sklar said she initially proposed a general session about the future of magazines, but the idea was nixed. After the iPad announcement, Sklar piggybacked on the hype, and suddenly the discussion made it onto the conference’s agenda.

Like Lewis, Sklar focused a lot of her discussion on advertising, though she had less experience to draw on. By her own admission, Sklar has never worked “in the gears of a magazine.” Still, that didn’t stop her from offering her own prescription for the future: “The structure of advertising needs to change.”

Asked for more details, Sklar said magazines need to find new ways to gather and analyze data about their audiences, and to sell advertising specifically targeted at different group. That will mean moving beyond the broad demographic information that advertisers traditionally use.

“Girls are geeks and guys like fashion,” she said. “Everything is blurring.”

Lewis wasn’t totally pessimistic either. He noted that most magazines that emphasize a cohesive, high-quality experience, have struggled to bring that same experience to the web, where the emphasis is on immediacy and constantly-updated content. The iPad presents an opportunity to “renew that effort” to bring a real magazine-style experience to a new medium. He added that there tends to be only a 10 or 15 percent overlap between a magazine’s print and online readership, so there’s an opportunity to deliver complementary-but-distinct experiences to separate audiences.

“The successful magazines in the future will see the iPad and the web sites and their print products as these three things that they can blend together,” Lewis said.