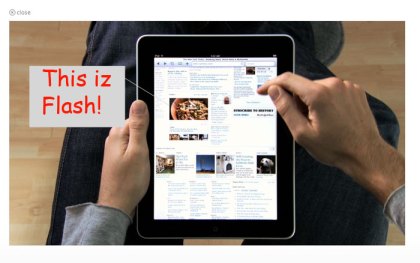 One of the biggest criticisms leveled at Apple’s new iPad tablet computer this week is that it doesn’t support Adobe’s Flash technology, a once-reviled animation platform that has become the de facto standard for embedded video and games on web sites.

VentureBeat’s Anthony Ha reported the lack of Flash on Wednesday during the device’s debut. And a photo posted by Engadget (below) shows a “broken plugin” error where a Flash animation was supposed to appear on a New York Times page.

To be sure, there’s no agreement between Apple and Adobe, the maker of Flash, to get it working. An Adobe employee huffed on the company’s official Flash blog Wednesday: 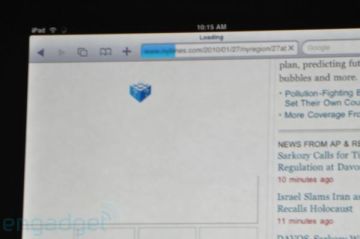 It looks like Apple is continuing to impose restrictions on their devices that limit both content publishers and consumers … without Flash support, iPad users will not be able to access the full range of web content, including over 70 percent of games and 75 percent of video on the web.

But attentive techies at 9to5mac have spotted what is clearly a working Flash animation in the middle of a nearly identical  New York Times page — in an iPad demo video published by Apple. You can watch the video below. The Flash embed scrolls past at the 2:00 mark in the clip.

Apple has never issued an official statement on why its iPhone and iPad don’t support Flash. Theorists have suggested it’s to reduce battery drain, surfing slowness, or bandwidth hogging on AT&T’s wireless networks. But as the video below shows, it works in the lab. But will Apple ship it?