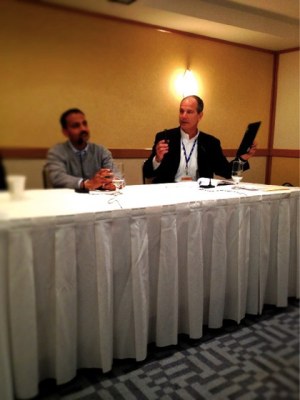 iPads have taken over the boardroom, and corporate CEOs and their egos are to thank for the somewhat surprising trend. At least, that’s the consensus among a panel of cloud computing and enterprise experts who gathered to discuss the reality and implications of mobile devices infiltrating the office.

“Apple is killing it in the enterprise, and they’re not even trying,” Alan Masarek, CEO of Quickoffice said in a season entitled “The year of Cloud Commuting” at the CloudBeat conference in Redwood Shores, Calif.

“Tablets started as lean-back devices, and usage would peak in the mornings and evenings, Masarek said. “But even that’s beginning to change … there’s been huge pickup during the day … and a ton of note-taking.”

“The iPad is a bonafide genuine business device,” Andy McLoughlin, EVP of strategy and co-founder of Huddle, added. McLoughlin said when he first started seeing iPads in office meetings he thought it would be a passing fad. But the trend is actually here to stay, he said, because executives are taking their iPads to meetings to capture information that they can then have access to later via the cloud. This reality means that app makers need to make their iPad applications first rate, he added.

But it was years before the enterprise opened its arms and accepted Apple’s iPhone into the mobile fold, so why has the iPad been able to leapfrog this long adoption cycle? The panel talked about new business environment factors, the large-screen form factor and access to cloud services as logical explanations, but perhaps it all boils down to CEO ego.

“The tablet is corporate bling for executives,” moderator and Forbes contributor Tom Taulli said. “When you get the ego going, you can sell a lot of software in the organization.”

Nick Mehta, CEO of LiveOffice, concurred. “This is the first situation where the top is driving technology adoption,” he said. “The CEO gets one, he goes to the IT department and he asks, ‘why don’t we support this?'”

Still, iPads, or tablets in general, are not viable desktop or laptop replacements, Vineet Jain, CEO and co-founder of Egnyte, said. Serious work requires other devices, he argued. “When you need to reference four things simultaneously — bullshit, you can’t do that [on an iPad].”