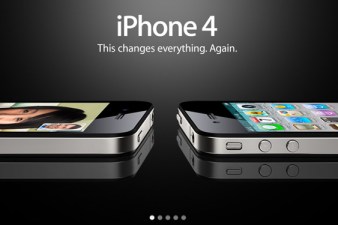 Apple CEO Steve Jobs unveiled a new iPhone this morning at the start of this year’s Worldwide Developers Conference in San Francisco. The iPhone 4 leaps ahead of the previous iPhone 3G S in more ways than many Apple-watchers expected. The shorter name helps, too.

GamesBeat reporter Dean Takahashi, who attended Jobs’ magic show, wrote that the iPhone 4 has a few major features that leapfrog ahead of the many touchscreen-and-apps phones now coming to market.

Here’s a recap of our iPhone reporting from today.

The resolution of the “retina display” is as impressive as Apple boasts. Text renders like high quality print. One thing that Apple didn’t mention in the keynote, though, is that the LCD pixels are much closer to the surface of the touchscreen … The effect is that the pixels appear to be painted on the surface of the phone; instead of looking at pixels under glass, it like looking at pixels on glass. Combined with the incredibly high pixel density, the overall effect is like “live print”.

iPhone 4’s video call software, dubbed FaceTime, will let iPhone and non-iPhone users alike make video calls. The iPhone now has a second camera that faces its user, useful for both FaceTime calls and Facebook profile photos. Videophone technology has been an apocryphal failure for decades. But VentureBeat’s reporters more or less agree that a handheld videophone may be less intimidating or awkward than a wall or desk mounted system. Why? Because you have more control over what’s onscreen, and can turn the thing away from your face instantly.

Apple’s built-in iAds system will let app developers sell apps at lower prices, then make money by selling ad space on which they and Apple will split the revenue.

Finally, iPhone 4 has a gyroscope inside it, a tiny spinning wheel that can detect more complex hand gestures than the existing accelerometer equipment inside both the iPhone and some of its top-tier competitors. It will make the iPhone a more responsive game controller. Plus, there’ll inevitably be some crazy gyroscope-based app no one’s thought of yet.

Rumors of new versions of the Mac Mini and MacBook Air were wrong. Same for predictions of a new Apple TV, a cloud-based iTunes based on the Lala service Apple recently bought and shuttered, a Magic Trackpad whose name has been trademarked, and most disappointingly, rumors of a free MobileMe service to rival Google Apps weren’t fulfilled.

Apple has added Microsoft’s Bing as a search engine option, but Bing will not replace Google as the default setting.

At one point, Jobs’ new iPhone stalled during a demo. The reason? 570 competing Wi-Fi hotspots in the room. This video captures the ad-libbed banter between Jobs and his mostly-tech-guys audience,

Below is a video Dean shot that compares the iPhone 4 to his current phone. And here’s his photo gallery.