The iPhone 5C is colorful, fast, light, and — if not exactly cheap — at least cheaper than Apple’s new flagship iPhone 5S. But the faster, more brainy, more beefy, and significantly-better picture-snapping iPhone 5S is killing the iPhone 5C in sales.

And it’s not even close.

“From the data we are seeing, 1.05% of all iPhones in the United States are now iPhone 5s and just 0.31% are iPhone 5C,” mobile and web analytics company Localytics said this morning. “That means that the iPhone 5S outshines the 5C by a factor of 3.4x, a clear indicator that the early adopters are favoring the high-end 5S compared to 5C.” 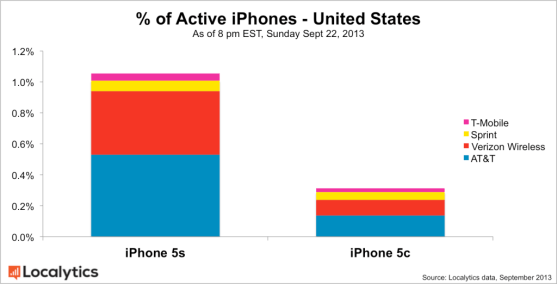 There’s a good reason for that, Localytics says: Early adopters are often the power users and the gadget lovers who must have the latest and greatest devices. In other words, those who will stand in line for hours for the new iDevices are self-selected for those who will spend more on their phones.

Unsurprisingly, AT&T, which has parlayed its status as the first-ever carrier to offer the iPhone in to a continued leading position in iPhone sales and subscribers, led the way. iPhone 5S and 5C activations on the large carrier represented .67 percent of all activated iPhones, according to Localytics’ data, while .51 percent were on Verizon, only .12 percent on Sprint, and a tiny .07 percent on T-Mobile.

That makes sense, in a way: the U.S has always been a high-end market.

But similar things are happening overseas. In Japan, the 5S is outselling the 5C by a massive ratio of five to one, and globally the proportion is 3.7 to one: 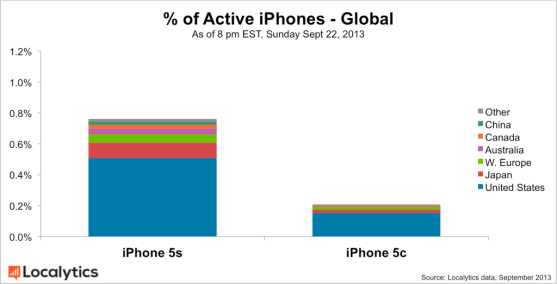 The only “developing country,” if you can still call it that, which is on Apple’s list of launch countries for the new iPhones, is China. Besides China, you have the U.S. (rich), Canada (rich), Australia (rich), western Europe (rich), Japan (rich), Singapore (rich), and Hong Kong (rich).

The real question about who is choosing the iPhone 5C, and whether it is indeed the international markets that have had issues with Apple’s high device prices in the past, is yet to be answered.