Especially major apps like WhatsApp, which is getting hammered by iOS 7 adopters.

Applause indexes over 880,000 apps on the iOS app store, and its statistics show that over 5,500 apps have at least one review that contains a mention of iOS 7. The average star rating is 3.56, but apps with reviews that mention iOS 7 come in quite a bit lower, down at 2.81.

Most likely, it’s due to the fact that when reviews mention iOS 7, it’s because the app developer hasn’t yet updated the app for Apple’s newest mobile operating system. And sadly, because the app just doesn’t work — or look — as good as it should. That includes big apps from major mobile companies like Skype and WhatsApp: 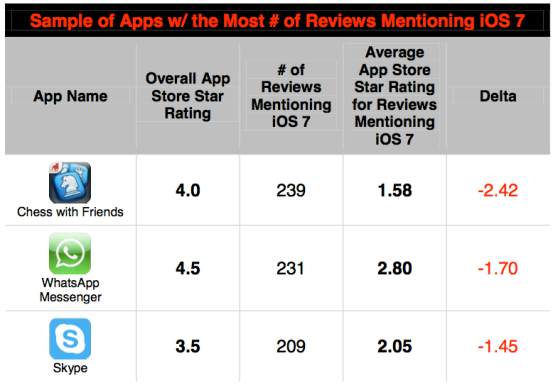 As you can see, when a review mentions iOS 7 for Skype, the average star rating is down 1.45 stars. For WhatsApp, that’s 1.7, and for Chess with Friends, it’s a massive 2.42 stars difference.

That’s huge, especially in the ultra-competitive messaging space, where WhatsApp is a perennial chart topper, hitting fifth on iOS by monthly revenue and second on Google Play for downloads, as well as sixth on Google Play for revenue earlier this year. Those are impressive feats (it even jumped an astounding 93 spots on iOS in App Annie’s rankings in one month), and they reveal that there’s also big money at stake here. Because users care about reviews and star ratings when they choose apps, and bad reviews mean fewer users.

Well over 200 million iOS users have now upgraded to iOS 7 — probably closer to 300 million by now — so this is no small group of users. And frankly, they’re a little pissed off:

“Keyboard of ios7 is messed up with space between text area and the keyboard.. Looks bad..”

“It keeps crushing after i update to ios 7, please update it for ios7”

One user who complained about the experience of using WhatsApp on iOS 7 then said something that will hit home with WhatsApp executives: “Better use Viber and Skype which works excellent.” Viber, of course, is an up-and-coming messaging system that boasts over 200 million users and is significant competition for WhatsApp.

For many big apps like WhatsApp and Skype, the sheer number of reviews they’ve already accumulated makes it difficult for new, negative reviews to significantly shift their overall rating, at least immediately. But over time, that’s going to change, unless the companies respond with new, updated versions that work well for iOS 7.

And those changes are massive business risks that major companies should not be taking. And they wouldn’t be taking those risks if they had simply prepared for iOS 7 … as they had months to do.