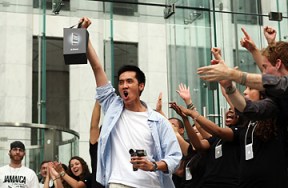 Apple’s iPhone sales have been impressive, but suppliers in China say Steve Jobs is planning to send sales through the roof later this year.

Taiwanese consumer electronics supplier trade publication Digitimes claims that Foxconn, the manufacturer of Apple’s next-generation iPhones, plans to build and ship 24 million of the touchscreen gadgets before the end of this year. Most of those 19.5 million — are planned for the second half of the year.

By contrast, Apple claims to have sold 33 million iPhones total from the phone’s launch in 2007 until the end of 2009.

According to an analyst for Digitimes, the fourth-generation iPhone will use a higher-quality touchscreen like the one currently used for HTC’s Hero phone. The new display is said to have more pixels, to allow a wider viewing angle, and to be more readable in sunlight.

The end game of those features: Making the iPhone an acceptable e-reader compared to Amazon’s Kindle, and competing with Android phones that have higher screen resolution than the current iPhone 3G S model.

The mass-production plan raises a question: How does Apple plan to sell so many phones? The most obvious scenario would be to let multiple U.S. carriers, not just AT&T, sell the phones after AT&T’s exclusive contract with Apple expires this year. Lower prices are another possibility, but in the USA carriers are already spending a lot to subsidize phones. Ideally, the new iPhone will be so hot we’ll gladly blow $200 on one.