Apple is going to do amazingly well this quarter.

Katy Huberty, an Apple analyst at Morgan Stanley, tracks smartphone sales using a web-search analysis tool called AlphaWise Smartphone Tracker. In the past five quarters, AlphaWise has proven to be immensely accurate: The survey has predicted within 1-9 percent of actual iPhone sales. The AlphaWise tracker went 9 percent over with its estimate for the quarter that ended in September 2013, but it remains a solid indicator of sales.

In this quarter, the tracker predicts that 39 million iPhones will be sold, up from Huberty’s personal estimate of 34 million and the general consensus estimate of 35 million. According to Forbes, at 39 million units sold, iPhones would show an increase of 25 percent year over year, versus the 17 percent increase registered last quarter.

Huberty speculates that Apple’s sales are doing so well because of their strong and enticing upgrade promotions. If customers upgrade to a new phone, the company will give them $99 for their iPhone 4 and $199 for their iPhone 4s. The popularity of the iPhone 5C has also increased because of its diversification, with an added lower-storage (8 GB), lower-cost model. Additionally, to drive even more sales, carriers and retailers are offering pretty significant discounts on the iPhone 5S and iPhone 5C.

Check out the AlphaWise Smartphone Tracker’s estimates over the past several quarters:

Here’s a chart with the same data: 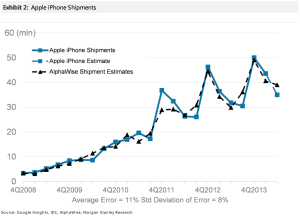 It’s incredible that this success has happened despite Apple feeling like its advertising campaigns are not as strong as they were 10 years ago, according to Advertising Age. Apple has not been able to deliver as strong of a campaign as the “Think Different” campaign that once gave the company its edge. Even Apple’s Olympics 2012 “Genius Bar” ads, once implemented, were quickly pulled, which left Apple with a desperate need to ramp up their advertising campaigns.

Now, with Apple taking its marketing strategies into its own hands by crafting an internal advertising agency and pitting it against TBWA/MAL (Apple’s current ad agency), we can’t wait to see what’s next for this powerhouse company.