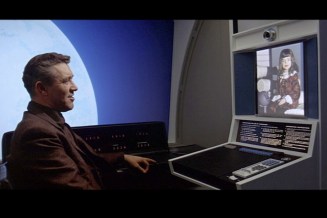 The fourth-generation iPhone due in June will allow users to conduct video chat sessions, according to the ace rumormongers at Engadget. Hit movie producer Sam Mendes (American Beauty) is said to be filming video commercials in which a mother and daughter talk to each other on their iPhone screens.

Apple’s rollout will be a test of whether people will or won’t use a videophone they can carry with them. In the past, tests of videophone tech have repeatedly found that people just weren’t hot about video calls as opposed to voice-only conversations.

No doubt Apple’s ad will depict a touching moment of people responding to each other’s faces onscreen. In reality, it’s impossible to make direct eye-to-eye contact because the cameras are offset, rather than being behind both callers’ pupils.

Video chat seems to be, for most people, a feature that sounds great but goes unused. On the other hand, the user-facing camera will make it super-easy for iPhone toters to take photos of themselves without needing to stand in front of a mirror. That’s the real killer app.

Don’t miss MobileBeat 2010, VentureBeat’s conference on the future of mobile. The theme: “The year of the superphone and who will profit.” Now expanded to two days, MobileBeat 2010 will take place on July 12-13 at The Palace Hotel in San Francisco. Early-bird pricing is available until May 15. For complete conference details, or to apply for the MobileBeat Startup Competition, click here.
Meanwhile, Walmart has cut its price on the soon-to-be-outdated iPhone 3GS model to $97.