I’ve been looking around for a smartphone game to show off my Apple iPhone XR, and I’ve found it in Command & Conquer: Rivals, the new real-time strategy game from Electronic Arts. It turns out it’s also a good game to show off what the iPhone XR can do. I’ve played with both the game and the phone for a while, and I’m enjoying both.

The new game has good audio and gorgeous graphics, as well as fast-action head-to-head combat with other human players. It’s been called a Clash Royale clone, as it has the same basic one-versus-one multiplayer action. But the audio is better and so are the graphics. I like how the rock-paper-scissors strategy works and how you have a wide array of weaponry to use against your rival in a kind of military chess game. The explosions are tiny on the mobile screen, but they’re first rate when it comes to quality.

The game takes advantage of the power of the iPhone XR, which has a 6.1-inch liquid crystal display screen. This phone doesn’t have a 120-hertz screen when it comes to a refresh rate; rather, it can respond to touches on the screen at 120 hertz. The graphics refresh at 60 hertz, which means it isn’t as fast as other phones on the market like the Razer Phone 2. Still, for most games and apps, I don’t think you aren’t going to notice this difference.

The Razer Phone 2 is also a great gaming phone, but it runs Android and is more expensive at $800. The iPhone XR costs $750 for 64GB of storage. (A variety of trade-in deals right now can bring the price lower.) It’s cheaper because it has a LCD screen rather than an organic light-emitting diode (OLED) screen. 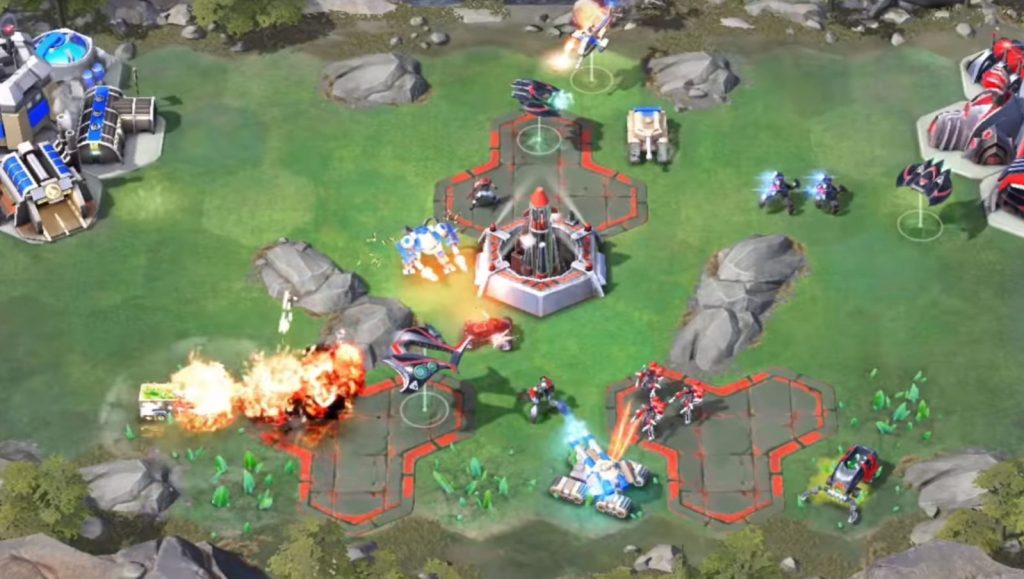 I’ve tried out the iPhone XS Max, the Razer Phone 2, and the iPhone XR. And truth be told, it’s not that easy to tell the difference in visual quality between the different screens.

The experience is immersive on the iPhone XR, as the sound brings you into the experience when it’s turned up high. Command & Conquer: Rivals is a good test of the graphics and sound combination because so much is happening on the screen at the same time. Add to that the visually demanding explosions, and you’ll see the XR does a great job keeping up with the processing requirements of the game.

A nice price with a lot of games

And plenty of titles can run on it. Others have pointed to games like Gangster New Orleans, Tekken, Black Paradox, PUBG Mobile, Lineage 2: Revolution, Arena of Valor, and CSR2. These games look beautiful too, and while I was fairly picky, it shouldn’t be that hard for hardcore gamers to find good games.

At first, I had a terrible time getting games like Pokémon Go to work on an iPhone XS Max. But I haven’t had that problem with the iPhone XR, which came out a little later, after Apple got the bugs out of the latest iOS version. It is rare for an app to crash on the iPhone XR, and I’ve been using it for weeks now. I’ve had other phones where crashing has been a real problem.

Above: My XR screen

The iPhone XR has a new A12 Bionic processor, just like the iPhone XS Max. It has haptic touch, instead of 3D touch, but no one is really using that much.

Thanks to the TrueDepth camera, it also has FaceID, which is great at recognizing your face and logging you into the phone and password-protected apps. The older and cheaper iPhone 8 and 8 Plus generation doesn’t have that. I don’t want to go back to the old way of typing in a passcode.

It’s also smaller than the XS Max screen, which turns out to be an advantage if you have small hands. My kid didn’t want to use the XS Max because she was afraid she would drop it.

Above: Capturing the action of Command & Conquer: Rivals on the iPhone XR.

Other smartphones can do the job

Like I said, it took me a while to find a game I really liked on the iPhone XR. Maybe it won’t take you that long, but you might want to consider whether the game you want to play really looks better on an XR compared to an older phone or an Android phone with a similar size screen. It might be a good idea to compare the games on different phones if you can.

While it’s reliable, I had some problems. The Bluetooth in my car won’t pair with the iPhone XR, even after updates. This happened before with older Apple devices, but patches eventually made it work. The iPhone 6, for instance, worked great with my car’s speakers via Bluetooth. The iPhone XS Max also eventually worked in my aging car, but not with the XR so far. I’m not sure whose fault this is.

The camera is noticeably worse than the iPhone XS Max

Sadly, I was spoiled by the quality of the iPhone XS Max 2X rear-facing camera, which is far superior to single 12 megapixel rear camera on the iPhone XR. If this really matters to you, then you should get the more expensive phone. That’s what you’re paying for. The XR does not have a terrible camera, but the results are noticeably different compared to the XS Max.

With the XR, you’re also not getting the Gigabit LTE service that is available for the iPhone XS Max models. That gets you faster data service, if it’s available to you, and it’s a nice stopgap until the even faster 5G arrives at a reasonable price.

Above: A screenshot of CSR2 on the iPhone XR.

When it comes to games, I’d rate the iPhone XR as quite capable. I enjoyed playing Command & Conquer: Rivals, a game from one of my favorite franchises, on Apple’s mainstream holiday smartphone.

More hardcore mobile games are on the way, and some of them can really exploit the graphics capability of the iPhone XR’s A12 Bionic processor. It’s a good choice if you’re a gamer who likes to play on mobile.

If you’re out shopping for a new phone this holiday, and you can’t wait for one of the new 5G models coming in the next year or two, I’d recommend the iPhone XR. The coming of 5G should make anyone pause, but it’s not clear how much those phones are going to cost and how much the data service will as well. So in the meantime, if you need something here and now to run your games and be a good mobile phone, the iPhone XR is a good holiday deal.

Disclosure: Apple provided me with a loaner phone for the purposes of this review. Our coverage remains objective.