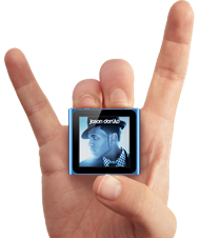 Using a USB cord to sync your information may become a thing of the past. Apple CEO Steve Jobs is apparently pushing hard to make wireless syncing standard in the next iPod, according to a source from Cult of Mac.

Jobs sees WiFi syncing as a way to renew interest in iPods, which have become increasingly obsolete with the mass adoption of iPhones.

The next iPod may also be sporting a carbon fiber casing to help solve problems with wireless synching, including issues with reliability, signal strength, case design and battery life.

Right now the only version of the iPod that has wireless hardware baked in is the Touch, however Apple is allegedly testing wireless prototypes for both iPod Nano and the iPod Classic, according to the source.