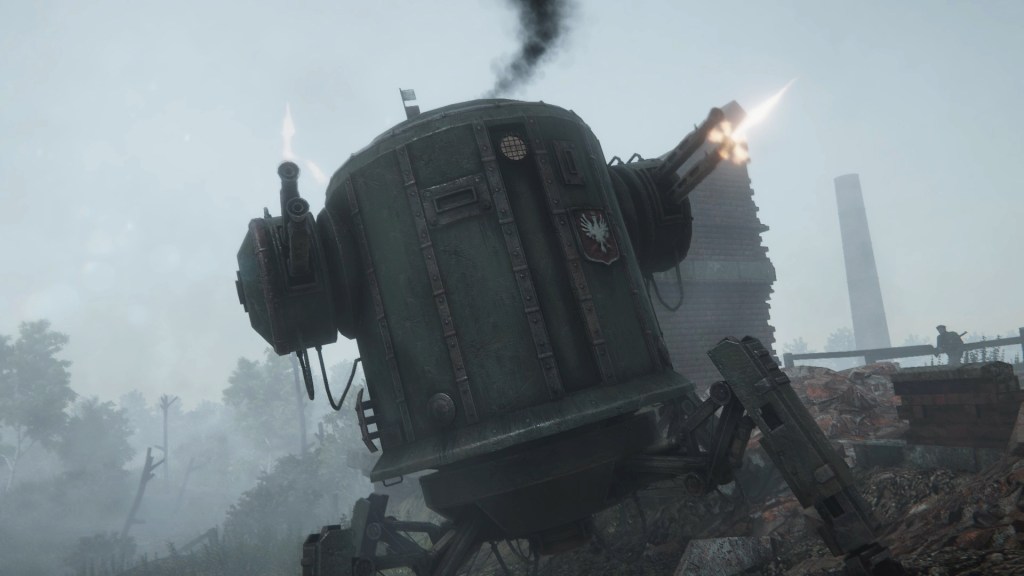 Above: Buckethead makes its charge.

GamesBeat: I recognize some of the mechs from Scythe. How many mechs did you create that aren’t in the board game?

Stolz-Zwilling: Jakub Rozalski is still working with us, and he helped us to create this world and the game. He adjusted the universe in a way so that he created stuff that was not in there before. He helped us come up with new inventions, new mechs and so on. Something that could have happened or could have looked like something might be from his universe. He had pictures, old pictures in which the Polania soldiers are standing on something that looks like a shot-down mech. What mech it exactly is is hard to decipher, but together with the artists he created new mechs that stomp through the universe. He also helped create something interesting, the hero units: Anna, Gunter, and Olga. They already kind of existed in his universe, but he helped to flesh out their stories for us as well.

GamesBeat: Because you have mechs, you don’t really have trench warfare or tanks, right?

Stolz-Zwilling: The Saxony guys … have very expensive units, very powerful and very good at defense, and they also look kind of traditional, somehow. You can see in this picture here, the Saxony guys have something that looks a lot like a tank. However, instead of treads or wheels, it walks on two feet. They have this spider tank in a way. But you’re right. You don’t dig trenches per se. You have them sometimes. You can see some here and here on the map. But you don’t build them. You build bunkers, barbed wire, mines, and so on. Essentially what you have to do in this game is go from cover-to-cover. It’s almost kind of WWI-feeling, with this being on your toes every time, trying to move all the time. However, not from trench-to-trench, but from cover-to-cover. But every cover can be destroyed within seconds when the right gun comes to bear. Whenever there’s a bigger gun or mech, it can shoot down almost everything you take cover behind.

You need to be on your toes, which also leads to the point — you have a base, of course, and you build units there, but you don’t really spend much time in your base. You really just use it to create new units. You don’t build any crazy research labs or whatever. What you do at every time is have your eyes on the battlefield and micromanage your units, not only sending them from cover-to-cover — you can see this with the green dots here — but also telling them what weapon to use. You have the grenadiers for instance, here, who can throw grenades, but by default they’ll just use their rifles. If you want them to use one of their skills, the grenades, then you have to manually tell them and aim where to throw. It’s more about micromanaging the units. 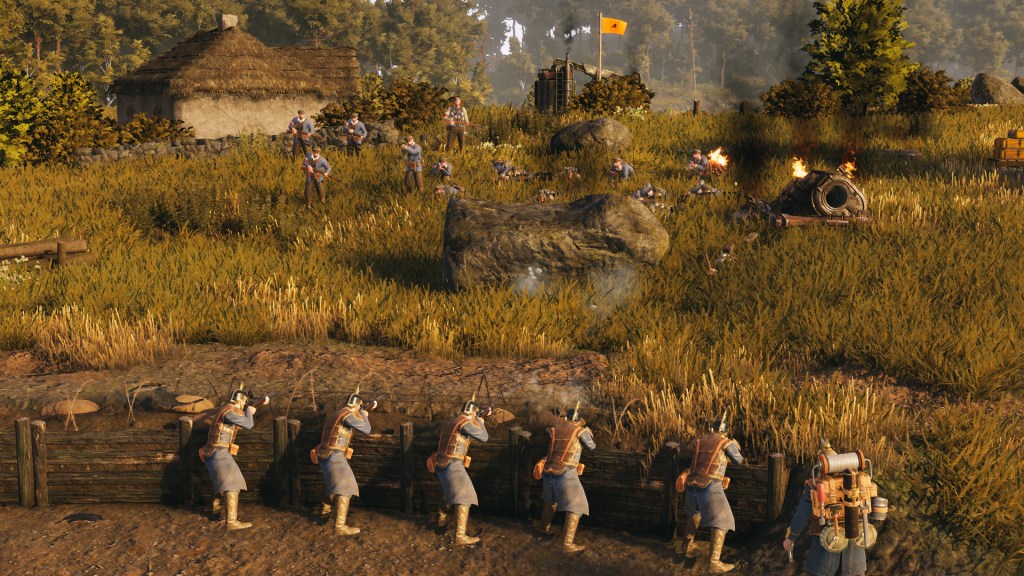 Above: Don’t sleep on infantry in Iron Harvest.

GamesBeat: What role does human infantry play? It seems like they would be very limited against mechs, even more so than against tanks.

Stolz-Zwilling: It’s as you say. It seems like the mechs are very powerful, maybe even too powerful, and that you don’t need infantry at all. It might also be a tactic to use only mechs. However, only infantry units can repair the mechs and heal other units. What’s more important, they are the only ones who can capture resource points. You have iron and oil, and these are created by points that are in a given position on the map. Only the infantry units can take them. Then you have those different crates here, those white boxes, which are either weapon crates, oil barrels, or iron crates. Only infantry can take them, and only infantry can go into house and shoot out of the windows. They can use that as natural cover.

But what’s the most important part — “iron harvest” is a real term. You might know this. If you Google that, you might find out something about the game, but you also find people who are digging in Normandy, digging up old ammunition and weapons. This is also represented in the game. When an infantry unit dies, they’ll drop their weapon, and you can exchange on the fly. You can take one of your units and take a weapon that you find on the battlefield. Let’s say you have a bunch of cheap engineers, and you’re able to shoot down those cannon guys here on the bottom right. They’ll drop their cannon and you can tell your engineers to take the cannon, and they become cannoneers. They’ll exchange their weapon classes and you can use them against mechs.

What’s interesting is that when you shoot down a mech, it doesn’t lose its weapons. Its remains stay on the battlefield, which creates either a natural blockade — if it stays there, a mech can’t go through, unless it’s shot down — or you can use it as natural cover, or you just iron harvest them. Again, only infantry units can do that. It’s pretty cool, because when you have many mechs attacking you and you’re able to defend against the attack, you’ll have the debris in front of your base, let’s say, and you can send your troops out, your infantry, and they can iron harvest those mechs. You gain resources out of that. If you’re able to survive the attack, you even benefit from what’s left on the battlefield. If you build weaker units and find stronger weapons, you can get stronger infantry units for cheap, but you can also get resources for free if you have time to dismantle the stuff laying around. You can’t neglect infantry at all, especially because they’re the only ones, again, that can heal or repair your units.

GamesBeat: How difficult was it to balance the mechs with the gameplay that you were talking about here and the infantry units? Mechs aren’t tanks. They’re different.

Stolz-Zwilling: It’s an ongoing process. That’s what we’re also going to do at the end of March and in the beginning of April. This was a Kickstarter project, and since Gamescom last year, or even before, we released an alpha version of the game, which is already out. The beta is better in every aspect. But we were asking constantly for feedback and trying to talk to the players, playing tournaments with them actually, asking for videos from their gameplay, and with that trying to balance the mechs. We had to make them stronger, had to make them weaker. The regular approaches. 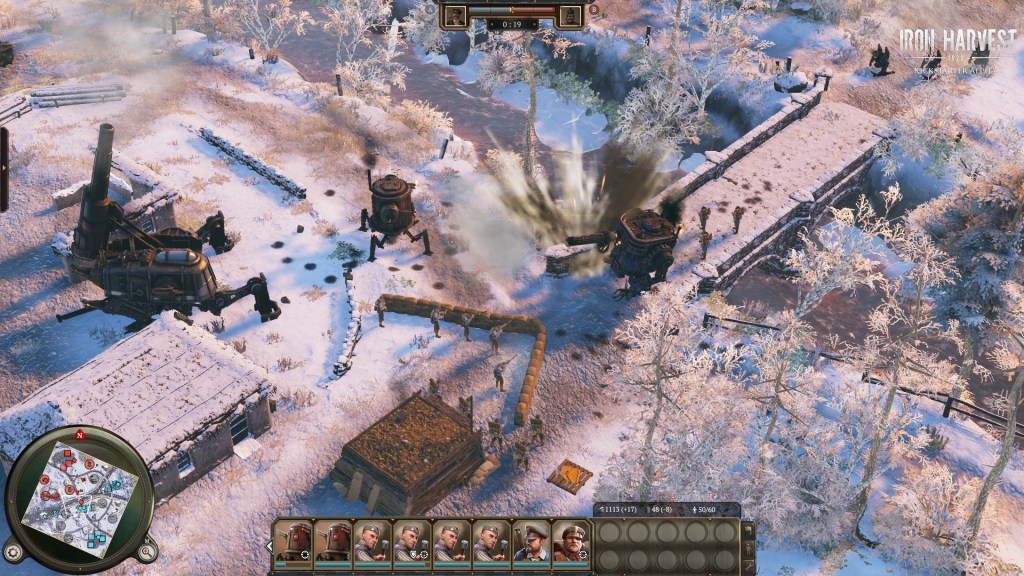 Above: Mechs give a new definition to “mobile artillery” here.

The good thing about balancing, at least for the units, usually it’s only a few clicks to change something, change the damage output and so on, hit points. In terms of balancing mechs versus infantry, to give the infantry a chance to win against the big mechs, of course it’s very hard, because we just wanted to make clear that fighting a tank with a rifle unit is very hard. But to give them at least some chance, when you’re able to outsmart the opponent and get behind the mech, shoot them from the back, you get something we call rear attack damage. You can see this on the display, on the screen I mean, when you hit them. This doubles or triples your damage you give the mech, and with that you have a real chance to take down even the biggest mech with infantry units. You just need to position yourself smartly, which again confirms what I said earlier about being on your toes, micromanaging your units, and keeping your eyes on the battlefield.

GamesBeat: Which of these mechs do you like the most so far?

Stolz-Zwilling: It’s a tough question. If you take a look on the map again here, we have the Polania mechs. Usually with Polania, even though they have weaker units on paper, I kind of sympathize with their play style. One of my favorite mechs is this little dude here, which is barely visible. It’s walking on two feet and it has a huge gun with a bayonet on the end. On paper he looks super weak, but he’s extremely fast, by far the fastest mech you can have on the battlefield. If you send him one by one against these guys here, but he’s very fast. I love it, because once he levels up — we have an experience system where, once they level up, they can learn new moves. Once he levels up he can use this bayonet to cut open other mechs, which is pretty cool. I like to do some dirty tricks with him. When it seems like I really can’t win the fight anymore, I try to build three or four of them, outrun the opponent somewhere he can’t see me, and then while the opponent is doing whatever on the map, I’m trying to outrun him and attack his headquarters from behind. These units are so fast that before he even knows what hit him, he might already have lost the match. They’re my favorite mechs.

Of course the easiest answer would be the biggest ones. I don’t have a render picture, only the picture here from the artwork, but this one is extremely powerful. He’s huge. He stomps through buildings and doesn’t stop at any time. What’s pretty funny, when you tell him to turn around at a certain point, instead of doing a big circle move, he just does many sidesteps, which is a cool animation. But I like to go for the small, fast guy.