Mobile advertising is having a big moment. Mobile app and game publishers now face a choice between two different ways of maximizing revenues from their advertisements in their games and apps. Mobile monetization and marketing firm IronSource is announcing today that it is giving its publishers a choice about whether to go with programmatic ads or traditional “waterfall” ads.

Maybe you don’t care about these things. But I’m sensing that advertising people are arguing in bars about this kind of stuff.

The publishers have figured out that auctions are a great way to get the most revenue from an ad buyer. The publishers can decide at the very last moment which ad to show to a particular user. Then the publisher turns to different ad sources, or buyers, to figure out which one will pay the most to show an ad to that user. Doing this in real time isn’t easy, but if the parties pull it off successfully, the right ad gets shown to the right user with minimal delays and great results.

Tel Aviv, Israel-based IronSource is announcing today it has a hybrid programmatic mediation service, enabling developers to programmatically manage mediation — or figuring out which ad to show — between software development kit (SDK) and non-SDK demand sources, and between programmatic or static demand sources. This kind of solution might be appealing to high-end mobile game publishers, IronSource said. 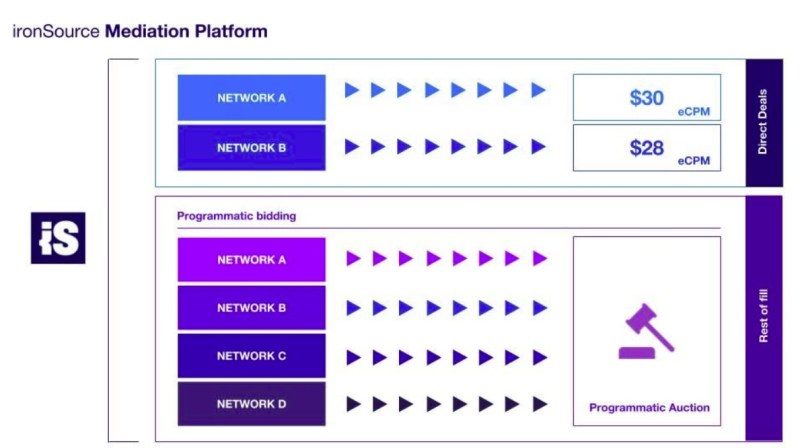 Above: Two different ways to serve ads and maximize revenue.

The older way, dubbed traditional waterfall ads, is to mediate the ad sources one at a time. When it comes time to show an ad to a user, the app seeks a bid from one ad network to another, in descending order of importance, until the ad is sold at the highest price. Ad networks that are ranked lower in the “waterfall” don’t get to bid if a higher-ranked ad network produces a satisfactory bid.

That system prevailed for years, but such auctions had drawbacks, as there wasn’t as much competition in real time for ad inventory or an ad slot. That led to lower overall revenues for publishers. It could also result in latency, or slower loading times for the ad, creating a bad experience for a user.

Then publishers started turning to header bidding, which was born in web advertising and has been adapted to mobile. With this system, every ad network bids at the same time. Bidders can increase their bids, forcing advertisers to compete harder to win the ad slot. This is a more programmatic form of ad mediation, with an auction happening in real time.

IronSource said its platform gives developers access to all the available options to maximize their yield and generate more revenue, while giving them maximum control and flexibility. The platform will launch in a closed alpha with selected premium partners at the upcoming Game Developers Conference (GDC), which starts March 19 in San Francisco.

“For all that programmatic is a hot buzzword and becoming increasingly important in the in-app ecosystem, we’re not interested in jumping on a trend just because it’s sexy,” said Tal Shoham, chief operating officer for mobile at IronSource, in a statement. “Our goal is to create a solution that brings maximum value to our developers, not one which forces them to make a shift which might not necessarily benefit their bottom line. That’s why we developed a hybrid platform which gives developers all the options available — robust programmatic mediation capabilities across all types of demand sources, and the option to stick to a traditional waterfall model if they want to.”

As Shoham noted, some rivals have gone fully programmatic.

With IronSource’s mediation platform, developers get technology that will result in the greatest number of options for maximizing the value of their inventory and managing their monetization effectively, the company said. Developers will not only be able to benefit from the ad revenue of every available demand source, they’ll also be able to mediate demand from the same source (SDK network or otherwise) in two different ways — programmatically and non-programmatically — at the same time. 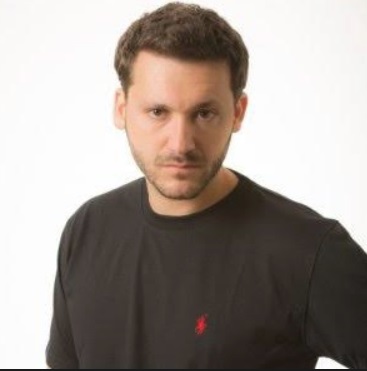 Above: Tal Shoham, COO for mobile at IronSource.

“Unlike other solutions available which are focused on connecting to marketplaces and exchanges, our solution is focused on creating the best real-time bidding environment for performance demand, which carries with it unique challenges — like managing the risk of buying on a cost per mille (CPM) basis when your campaign key performance indicators (KPIs) are performance-based,” said Shoham. “Our background has been in the gaming industry where performance demand has traditionally been a big part of developers’ ad revenue. As we added a programmatic layer to our platform, it was important to us to create a solution which could solve for the unique challenges and risks that come with managing performance demand in a programmatic context. This ensures there is no lost revenue for our developers, and that buyers get the best campaign optimization possible.”

The platform will provide programmatic mediation across all ad units, including sophisticated interactive creatives like playable ads, which are one of the biggest revenue drivers for developers and growth tools for advertisers, IronSource said.

“The main goal here is still very simple — maximize the value and accessibility of in-app traffic, and enable app developers to drive more revenue,” Shoham said. “Programmatic is clearly going to play an increasingly critical role in the app monetization landscape moving forward, and now through our hybrid platform developers can take full advantage of its benefits.”

Gil Shoham, cofounder at IronSource, said in an email, “A key benefit is our transparency. Developers can see the allocation of demand per their traffic, understand the reasoning behind it, and audit the algorithm’s choice if they choose. It’s all available in our reporting. Either way, our platform is completely agnostic to who the demand source is — including if it’s our own network. We treat all demand sources the same — what decides ultimately is the performance and the bid per impression.”