IronSource has a broad view of what is happening in mobile user acquisition, brand advertising, games, adtech, and even 5G technology. And that’s why I thought it would be interesting to talk with Tal Shoham, chief operating officer for developer solutions at IronSource.

Shoham made some predictions about what will happen across categories as changes in one field — such as the introduction of 5G wireless data technology — can create opportunities, like making connected hardcore games on mobile devices more viable. We talked about IronSource’s expectations for the year.

And we also noted that IronSource is introducing a new tool dubbed the ROAS Optimizer, which helps mobile marketers figure out return on advertising spend (ROAS) using both in-app purchase data and user-level ad revenue data. IronSource is launching this tool today to enable user acquisition managers to automatically bid on dynamic CPI (cost per install) rates to hit their desired ROAS goals.

The tool is one of many that can help simplify the hard task of getting new users for mobile apps and games. And it fits with Shoham’s prediction that finding users through advertising is becoming more and more complex.

“There’s no difference between advertising in-app and advertising in traditional channels. In both, there are different qualities of users stemming from a variety of different factors, and advertisers must know how to bid according to those users,” said Shoham. 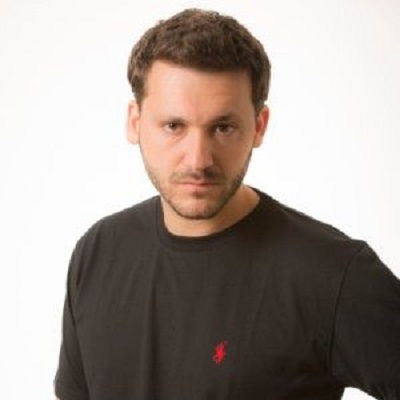 Above: Tal Shoham, COO of mobile at IronSource.

GamesBeat: What are the top predictions you have to talk about?

Tal Shoham: The first thing we thought about is everything that evolves the technology in terms of internet and communications technology. 5G and everything that has to do with upgraded phones and unlimited packages of data. We see that starting to affect the newest tech that’s being produced. That’s not a hyper-casual prediction at all. It has nothing to do with hyper-casual, actually. Hyper-casual can run on all phones.

This trend, in terms of 5G — phones could have crazy capabilities like unlimited packages. We feel that will create more advanced hardcore games that need those capabilities to live. We already see some of them — with games like PUBG or Fortnite — hardcore 3D games that need to be online all the time and you mainly play on strong phones. With old phones they’re not a great experience. That’s one prediction, everything around tech upgrades, richer content, upgraded phones, and unlimited packages of data.

GamesBeat: Tell me another prediction.

Shoham: The second thing I’d say is that everything that has to do with user acquisition and monetization, in terms of the teams themselves within gaming companies — we feel that’s going to become much more in sync, up to the point where it will be one team in many of the companies we’re talking to. This definitely has to do with hyper-casual games, because with hyper-casual, the user acquisition and monetization will usually be on the same team. We see that with all the leading hyper-casual game companies.

It’s one person who takes care of user acquisition and monetization per title, which is very different than what we’re used to with the triple-A studios, the hardcore studios, and even the mid-core or casual studios. A lot of the companies we work with are already consolidating the teams in charge of user acquisition and monetization, or they’re working a much more synched way than they used to.

It doesn’t need to be ad monetization or in-app purchase monetization, but usually this is relevant for heavy ad monetization revenue games. That’s happening more and more. The hyper-casual trend, again, is pushing this a lot more, because there the user acquisition and monetization go hand in hand. The return on ad spend is being calculated by the monetization team, which is in charge of ads, much more than on other teams.

In some companies this is still completely isolated. We just had a few meetings with companies in London where the marketing and monetization teams are not in sync at all, which is something that can happen in a game that’s heavy on ad monetization. But that’s not happening in the hyper-casual world. 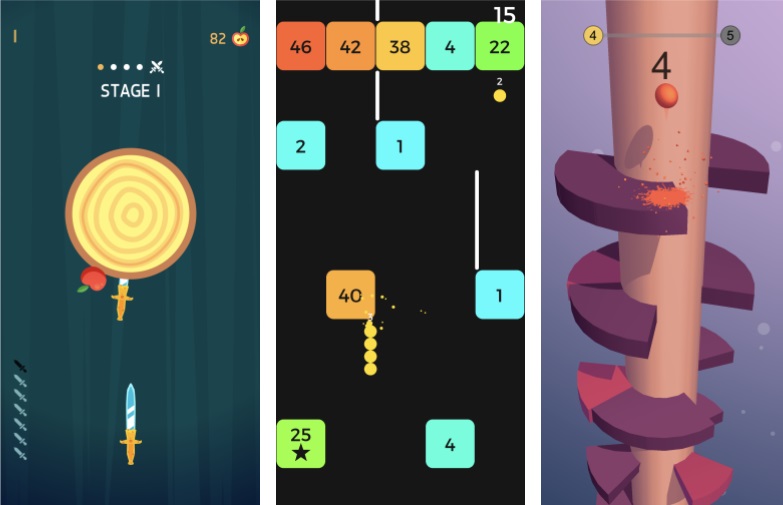 Above: Hyper casual games are taking off.

GamesBeat: What else have you got?

Shoham: The third prediction we talked about, and that we feel strongly about, is publishing. We see that as a huge trend in the last year. More and more game companies are going into publishing, meaning not necessarily building the title, the application, the game themselves, but finding someone else to build it and doing everything else. That means marketing, everything having to do with monetization, helping with localization, helping with design here and there, giving all kinds of pointers. We see that becoming a huge trend.

It’s happening not only with gaming companies. We also see what happened with AppLovin. They started Lion Studios, a big notion around that. We see it with more and more game companies. In the hyper-casual world, of course, it’s very strong. It happens all the time. Voodoo, Ketchapp, all these guys, this is one of their biggest value propositions in the market: the fact that they don’t build all their games. They build only a small portion of their games. But we also see it with companies like Miniclip and others.

That’s going to become stronger and stronger. With the barriers to entry, the capabilities you need to build a game on your own or with a small team — when you find a publisher that becomes more and more available. For us to take part in that, we don’t see that it makes sense as a technology vendor or a mediation provider, and an ad network as well. But we see it as a strong trend. We’re seeing it in a lot of other companies we’re talking to, both gaming companies and other companies. 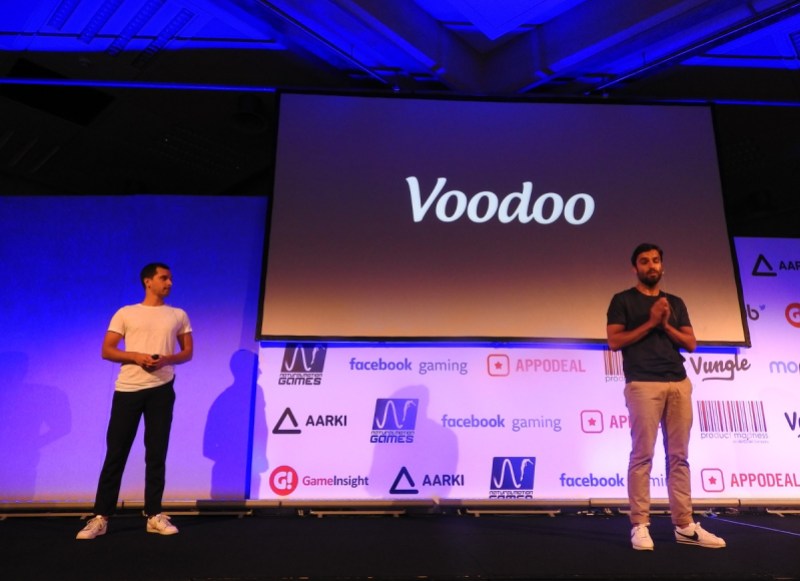 Above: Alex Yazdi (right) and Gabriel Rivaud of Voodoo at Casual Connect Europe.

GamesBeat: How did people start coming up with the distinction between casual and hyper-casual? Did a particular game blaze that trail?

Shoham: The main difference is that hyper-casual games are usually much more simple. They don’t need a lot of resources to run them. They’re not complicated. You look at examples like Crossy Road or Flappy Bird. Flappy Bird broke the market back in the day. They’re games where you don’t need a team of 10-15 people. You can build them with one, two, three developers. It doesn’t need months of work. You can build them in a couple of weeks, once you have an idea. You don’t need a lot of designers. It’s a very simple design that you can build in a very short production time. Likewise, the gameplay is very simple. It usually starts from the same point as you finished the last time. We do see hyper-casual level-based games as well, though.

Finally, the majority of the revenue, more than 80 to 90 percent, comes from ad monetization rather than in-app purchases. That’s probably the biggest differentiator compared to casual, mid-core, and hardcore. You have casual games from King and others where the majority of the revenue comes from IAP. In hyper-casual it’s the opposite. The revenue for those companies is coming from interstitials, rewarded video, banner ads, and maybe a bit of removing ads as an in-app purchase. But only 10 or 20 percent, or even in some cases 2-5 percent, comes from IAP, which is a huge difference in the economy of a game, how a game is built, and how much you need as far as rewards or currency within the game. There’s not necessarily a big incentive for players to purchase a currency and convert that into IAP when you monetize primarily with ads.

Another prediction we can talk about, then, is what’s going to be the future of hyper-casual? We do see, with some of the clients we have and some of their games, that hyper-casual is probably going to evolve into something else. It’s not going to stay as simple as it is. The next generation of hyper-casual, or hyper-casual 2.0 — we’ll see publishers adding more layers of depth, metagame layers and other features to hyper-casual games. It makes a lot of sense.

One thing I feel very strongly about — a lot of the things that are working well for casual games, in terms of how to monetize users and drive them into IAP, are going to penetrate more into the hyper-casual world. We’ll see a more balanced economy. Instead of 90 percent coming from ads, it’ll be more like 50-50. There are a few good examples of companies already doing this, either with IAP or subscriptions or removing ads or whatever it is. There will be more layers to push users toward IAP and other monetization. We feel that’s going to be much more beneficial for Google and Apple, because they see a cut of that. They’re pushing toward that route. We predict that hyper-casual will become a bit more similar to casual, with an emphasis on functionalities that casual has as well to monetize users with IAP.

Another interesting trend or prediction we see is automation. Automation is very big. A lot of the companies out there are working on it. Game developers are trying to automate as many tasks as possible in the casual and hyper-casual world, and also in platform and technology development. For instance, one of the strongest products we released this year was something that allows you as a UA buyer to set all of your bids automatically according to the results of your campaign. You can change 20,000 or 30,000 different bids every day in an automated way, which is far more manual work than a UA manager could ever do.