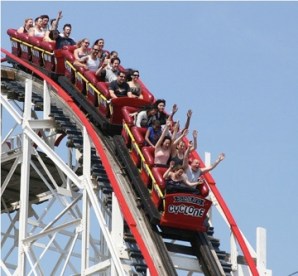 This is more than a case of sour grapes. Time Warner CEO Jeffrey L. Bewkes belittles movie-rental company Netflix in an interview with The New York Times today. “It’s a little bit like, is the Albanian Army going to take over the world?” he asked. “I don’t think so.”

This “Albanian army” has transformed itself from a mailer of DVDs to a streaming media service and procuring the rights – for not much money — to distribute all kinds of movies and television programs. It is a Wall Street and marketplace juggernaut.

Netflix’s success in streaming has taken some media companies by surprise. They weren’t bothered when the company simply distributed movies on discs. DVD rentals cut into lucrative DVD sales, but that was going to happen anyway, and Netflix at least helped media companies make more money from rentals.

The dynamic changed radically as Netflix moved into streaming. One deal it cut, with the Starz movie channel, has it paying a reported $25 million a year to stream movies from Sony and Disney. That’s peanuts, especially given the much-lower cost structure Netflix enjoys by streaming rather than mailing. One analyst told the Times that Starz struck “probably one of the dumbest deals ever” with Neflix.

But that deal expires next year, and analysts presume that Starz – and others – will begin demanding much higher licensing fees from Netflix, perhaps amounting to 10 times what Netflix is paying now.

At that point, Netflix will likely need to increase the all-you-can-eat, $8 monthly fee it charges streaming subscribers – possibly by a lot. Movie watchers might look back on this as a golden age, when they paid a few dollars a month for access to a cornucopia of movies and television.

The situation highlights not only how content companies made bad deals, but how some of them completely missed the boat on streaming and utterly failed to recognize what Netflix was up to. Bewkes even admits as much. The Times‘ Tim Arango paraphrases the CEO this way:

Mr. Bewkes said decisions about deals that might have been made two years ago by a junior employee in a studio’s digital division are now reaching his desk. For example, Mr. Bewkes himself approved a deal to allow Netflix to stream “Nip/Tuck,” a drama produced by Warner Brothers’ TV studio.

It seems likely that over the next couple of years, as content companies negotiate with harder noses, Netflix’s profit margins will appreciably decline. If enough air is let out of its stock price, last week’s decision to list the company in the S&P 500 index might look premature.

Media companies, whose own stock prices look anemic next to Netflix’s, are slowly realizing that online streaming of their content is an inevitability. There is also, of course, Hulu. And Time Warner’s own HBO is rolling out a service, HBO GO, to give its cable subscribers access to content online. The owners of content hold an enormous amount of negotiating power when it comes to distribution. They just have to wield it effectively.