Facebook sacked its chief financial officer today, as the company stares down rumors about difficulties getting financing and high growth-driven costs — now it is defending itself to the press by saying it is on track to beat revenue projections and make 70 percent more than in 2008. Facebook brought in revenues of nearly $300 million in 2008, I’ve previously confirmed, so could that mean around $500 million in 2009? This number is substantially higher than what we’ve heard its internal revenue projections to be (between somewhere under $400 million to possibly as high as $430 million). So what’s going on? 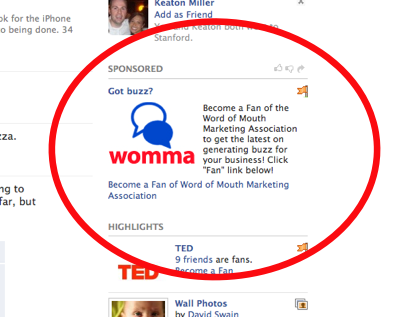 The company has been running banner ads through a deal with Microsoft for years, but a source close to the company says that its revenues have become “less and less dependent” on them as a way of making money. Instead, Facebook seems to be making more money on anything from its own banner ad sales to its experimental advertising efforts. The latter includes ways for advertisers to pay for their public page to show up within Facebook’s homepage “highlights” section. It also offers a range of self-serve advertising on other parts of the site, including ways to target ads to particular demographic groups on the site — these ads have been a big contributor to revenue, TechCrunch recently heard.

Facebook has doubled in size to 200 million users since last August alone. Advertisers want to understand how to reach its users (at least users who advertisers deem able to buy their products, namely those in wealthier countries, more on that in a moment). Maybe advertisers are putting more money into Facebook versus other web ads to see if or how they might work better. Facebook is constantly tuning where its ads appear, along with the rest of its redesigns, so creatively advertising to its users is an at least — how does one say — evolving process. Or, maybe those experimental ads are actually working and that’s why advertisers are apparently spending more on it.

Wait. Ad revenue is growing for a social network?

If advertising is where Facebook is making its money, it’s going against the other main trend in trying to monetize social networks. Tencent, a Chinese web portal, IM client, social network and more, made over a billion in revenue last year — mostly from virtual goods. Other social networks are headed in that direction. Most prominently, hi5 — a social network with 62 million monthly active users around the world, but not so much in advertising-rich countries — cut half its staff today because it couldn’t raise funding. It is apparently refocusing its resources on virtual currency, doing things like selling virtual goods within games.

Facebook doesn’t know how long its growth trajectory might hold up, and maybe it will begin to look closer into virtual currency. The company says it’s still thinking about some sort of universal payment service for third party developers and their games, but so far we haven’t seen more than its own years-old virtual gifts feature.

So far, MySpace is the other U.S.-origin social network that is making serious ad money — that I know of. It has more users in the U.S. than Facebook, and may have made up to $800 million last year off a range of ad products, including lots of banner ads as well as self-serve and demographic-targeted ads. Third party estimates suggest that MySpace made less than it thought it was going to.

What we still don’t know is if Facebook has figured out a way to get long-term growth — especially beyond banner ads — or if the new money is of a more fleeting kind. At least the company appears to be able to pay for its growth, as I wrote yesterday. Today, it says it expects to be cash-flow positive by 2010.

Debates about how to make money and cover costs appear to have led to Facebook CFO Gideon Yu’s departure today. Note: He’s already been replaced by an interim chief financial officer, Silicon Valley veteran Peter Currie. Yu left because of conflict with company founder Mark Zuckerberg, according to AllThingsD, over issues ranging from “increasing advertising revenue to fund-raising discussions with investors.”