Could America finally be making progress toward getting more women into the tech industry?

New data from the U.S. Bureau of Labor Statistics suggests we might be.

Of the 39,000 jobs created in tech this year, women filled 60 percent of them. Tech career Hub Dice found that this is the first time women have represented a majority of new hires in the past decade.

The tech industry undoubtedly has a gender problem, and the topic of women-in-tech topic has been debated for years. Women make up less than one-third of all employees in the tech sector. Only 3 percent of tech startups have women founders, and tech companies employ an average of 12.33 percent female engineers. Women contribute to just 1.2 percent of open source software and 5 percent of patents.

These numbers are dismal, but at last it seems that women are making gains. 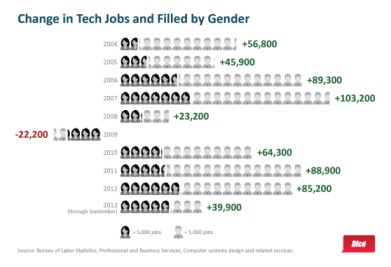 Part of the improvement could stem from Yahoo CEO Marissa Mayer and Facebook COO Sheryl Sandberg, who have been vocal about the need for a more women in tech and a corporate environment where they can succeed.

Research has shown the benefits of a diversified workforce, and American women are highly active on the Internet. They make up 70 percent of both Snapchat’s and Pinterest’s user bases, and women are more likely to use Facebook and Twitter than men. Nielsen estimates that women’s spending power in America ranges from $5 trillion to $15 trillion and that they will control two-thirds of consumer wealth over the next decade.

The notion that women don’t like technology or aren’t interested in technology is absurd, and building a tech community with a more equal gender distribution is long overdue.

Yes, getting girls interested in STEM education is critical to achieving this goal, and yes, creating flexible work policies for employees with children is important for keeping women in tech as well. Sexism and sexual harassment need to stop, and women need to support each other.

But all of these efforts are moot if companies aren’t interested in hiring women in the first place.

The BLS numbers don’t differentiate between full- and part-time jobs and “computer system design, and related services” doesn’t mean that these hires are for technical positions. Furthermore, the number of women getting hired didn’t increase this year, but rather the number of men getting hired decreased, so all that really shifted was the ratio.

These numbers don’t mean that the tech industry is emerging from its period of gender stagnation, but I prefer to be an optimist.

Also watch this video for ‘lets get girls in tech’ awesomeness.