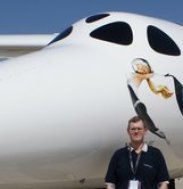 [Editor’s Note: Yesterday, we heard from William Pomerantz, who runs Google’s Lunar X Prize, on how private enterprise may give NASA and America’s space program a much-needed infusion. One question he didn’t touch on is how the current economic downturn may affect these space privateers and the investors who keep them flying. Below, Jeff Foust, editor and publisher of The Space Review, sheds light on the issue.]

Over the last several years, an entrepreneurial space industry has started to flourish in the shadow of NASA, Boeing and Lockheed Martin. Collectively referred to as NewSpace, this flock includes recognizable names — Virgin Galactic and SpaceX among them — as well as small companies toiling in the obscurity of the California desert. What they have in common is the drive to develop better and cheaper approaches to spaceflight. But now, with the economic downturn shaking the faith of many venture capitalists, will NewSpace have the traction to ride out the storm?

Some companies, like Virgin Galactic, SpaceX and Blue Origin (Amazon founder Jeff Bezos’ secretive launch vehicle venture) are funded primarily or exclusively by extremely wealthy founders, and are less susceptible to market forces that could dry up outside investors. For other, less fortunate NewSpace players, the downturn has come at exactly the wrong time. Lining up the ten or even hundred million dollars just got a whole lot harder. Without the money, these companies’ visions of reusable rockets, lunar rovers and the like will probably remain just that — visions — and the organizations themselves will either go into hibernation or out of business entirely.

So far, the tone hasn’t been that alarmist. At last week’s Space Investment Summit 5 (SIS5) in Los Angeles, NewSpace firms, investors and industry analysts downplayed any immediate effects the country’s economic situation may be having on funding prospects.

“The fundamental promise is that investment in this industry, at least for NewSpace companies, is not easy — it’s extremely difficult,” said Amaresh Kollipara, founder and managing partner of Earth2Orbit, a company that brokers launches of satellites on low-cost Indian rockets. “I don’t think the economic climate has a direct impact. It was hard before and it still is hard.”

Venture capitalist Steve Jurvetson, the conference’s keynote speaker, said the economy won’t be as hard on early-stage companies as it will on their well-established peers seeking later and larger investment rounds.

“Getting a first round of financing might not be that much more difficult,” he said. “Whereas getting that next check is really tough.” Jurvetson, whose firm Draper Fisher Jurvetson doesn’t actually invest in NewSpace companies, was invited to provide an outside perspective on the venture finance situation. He advised the space privateers in the audience to maximize short-term opportunities to generate revenue.

Nine companies presented their business plans at SIS5, ranging from suborbital launch vehicle developers to medical monitoring ventures hoping to convert space technology. Each had a different goal and a different experience with investors. Celestis, a startup that launches cremated remains into orbit, was looking for only $1 million in funding to make some key hires and roll out a marketing campaign. At the other end of the spectrum, Astrobotic Technology, one of the teams competing for the Google Lunar X Prize, is asking for $60 million to develop the first of a series of lunar rovers.

In these presentations and in casual conversations, space entrepreneurs gave mixed accounts of the market’s influence. Ferreting out relatively small sums of money from angel investors is still very possible, apparently, but pulling down larger sums — even in the tens of millions — from institutional investors has become much more challenging than it was just a few months ago. A telling example: XCOR Aerospace, a California company working on a suborbital vehicle called the Lynx, recently raised a relatively small round of funding from Desert Sky Holdings. Meanwhile, Oklahoma-based Rocketplane Global has virtually stopped all technical work on its XP suborbital vehicle to focus its efforts on raising a round in the tens of millions. Ironically, this is the converse of what most tech startups are confronting in the Silicon Valley, where VCs are willing to pump funds into their more rooted portfolio companies and disinclined to take chances on first-round solicitors.

The daylong conference was the fifth in a series that started 18 months ago in New York, with a sixth already slated for next May in Orlando. By then, we’ll all have a clearer view of what the economic fallout will be for the NewSpace industry and whether some of its loftier goals have drifted out of reach.

Jeff Foust is a senior analyst with the Futron Corporation, an aerospace and telecommunications consulting company in Bethesda, Md. He is also editor and publisher of The Space Review, a weekly online journal that covers space policy, technology, history and commercialization. You can read more of Foust’s SIS5 coverage in this week’s issue.