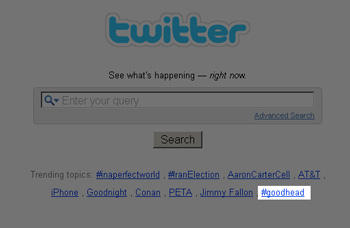 Twitter lovers: Cherish, these days, because soon they’ll be gone. Last night several Twitter users managed to get several lewd phrases into the trending topics leaderboard, but they were quickly removed. (Read/Write Web reporter Jolie O’Dell, who reported the story, couldn’t decide whether those phrases were totally inappropriate for the Internet, or whether you should check out her screengrabs of them. Pick one, Jolie, pick one.)

It seems inevitable that Twitter’s management will choose to clean up the spontaneous dirty words that appear on all users’ screens. And such a policy may already be in effect.

Compared to the action on the ground in Tehran, a few smutty hashtags on Twitter don’t seem like much. But a huge part of the service’s appeal is the sense of transparency and immediacy it exudes. For the majority of early adopters who pounced on Twitter the same way they’d pounced on Orkut five years ago, the occasional dirty word is proof that the system isn’t rigged.