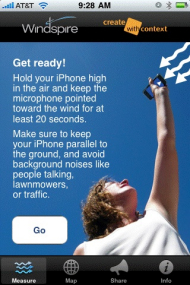 As rooftop solar panels catch on and more people start generating their own clean energy, one company is looking to get average consumers interested in residential wind opportunities — and its leveraging everyone’s favorite consumer device — the iPhone — to do it.

Mariah Power, maker of Windspire wind turbines suitable for homeowners and businesses, just introduced its “Windspire Me” iPhone application, which will allow users to gauge the wind speed in their backyards or outdoor office spaces to determine whether they would be good environs for urban turbines. All you have to do, after downloading the free app, is raise your phone to the sky.

Last month, San Francisco released plans for integrating smaller wind turbines into the city’s landscape to up its renewable power usage. This is something other metropolitan areas are considering as well. And there are even more applications in regions where rural areas may be off the grid, or in developing areas of the world.

Few people know how much wind is required to generate electricity. Mariah’s Windspire model (see video below) — measuring 30 feet high and running on an average wind speed of 10 miles-per-hour — isn’t necessarily intended to power whole houses, just migrate some of their consumption off traditional sources of power. For example, the company says an average wind speed of 12 miles per hour could be enough to power a refrigerator and freezer for a year while reducing carbon emissions by 1,650 pounds.

The Reno, Nev.-based company’s “Windspire Me” application uses the iPhone’s microphone to measure wind noise. Then an algorithm is applied to convert a decibel rating into wind speed. The app itself was created for Mariah Power by design firm Create with Context.

Of course, the real purpose of the app — which isn’t all that scientific, admittedly — is to get people more interested in the possibility of wind as a residential method for energy generation. The company’s web site is collecting email addresses from interested users starting today. And it is being submitted to Apple’s App Store this week, where it will come up against Wind Meter and Wind Speed, two apps who similarly use the handheld’s microphone to measure wind speed. They are generally accurate within 1.5 miles-per-hour.