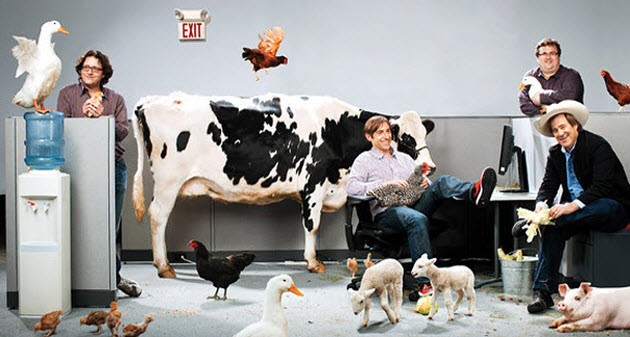 Zynga is currently valued at $5.27 billion on SharesPost, a secondary market, where Zynga employees can sell shares that they own in the private company. Redwood City, Calif.-based EA is worth $5.24 billion in public trading on the Nasdaq stock market. The SharesPost listings are thinly traded compared to EA’s stock, but it is perhaps the only real measure of the value of Zynga’s stock at any given moment. Many hope that Zynga will go public, but it hasn’t done so yet.

Serial entrepreneur Mark Pincus (pictured in center) started Zynga four years ago to make Facebook applications. Starting with Texas Hold Em Poker, Zynga managed to grab lots of users on Facebook and figured out how to make money from a small percentage of them. Adopting the “virtual goods” business model pioneered by South Korea’s Nexon for online games, Zynga charged real money to players for virtual currency, which was used to buy poker chips and other virtual goods in Zynga games. Now, thanks to virtual goods sales, Zynga is expected to grab roughly a third of the $1.6 billion market for virtual goods in the U.S. in 2010, according to Inside Network.

Zynga really took off in the middle of 2009 when it launched FarmVille, which is still the No. 1 game on Facebook with 57.4 million monthly active users, according to AppData. With such popular market-leading games, Zynga can cross-promote its titles and advertise them as well, allowing it to turn lots of its games into huge hits. In addition to FarmVille and Texas Hold Em Poker, FrontierVille, Mafia Wars, Cafe World, Treasure Isle and PetVille all have more than 10 million users. Overall, Zynga has 214.5 million users.

CrowdStar is a distant No. 2 at 54.2 million monthly active users, and EA is No. 3 at 44.7 million users. These numbers fluctuate dramatically and are all down since Facebook cracked down on game message spam in the spring. EA bought Playfish for $400 million in the fall of 2009, but it hasn’t been able to close the gap against Zynga, which has been No. 1 for a long time.

EA’s market value has dropped this year. The company lost its title as the largest independent maker of video games to Activision Blizzard, which has titles such as World of Warcraft to fuel its growth. But EA is no slouch when it comes to online games. Digital online businesses at EA are expected to generate $750 million in revenue in the current fiscal year, or around 20 percent of overall revenue. That means EA’s online game revenue is significantly bigger than Zynga’s online game revenue (which, of course, is all of Zynga’s revenue).

Yet the market values Zynga as equal to EA in market share? Does this mean the market discounts the rest of EA’s nearly $3 billion or so in traditional video game console and PC game revenues? If so, then Zynga is truly overvalued.

It’s also interesting to compare Zynga’s value to one of its arch rivals in the social game market, Japan’s DeNA. DeNA has come on strong in the Japanese social mobile game market. It recently outbid Zynga to buy iPhone game publisher Ngmoco for $400 million. DeNA’s market capitalization in Japan is around $3.6 billion. But the company says its revenue run rate is currently around $1 billion. So DeNA’s revenue is likely bigger than Zynga’s (Zynga does not disclose its number). So Zynga’s stock is overvalued by that comparison as well. Yet another comparision: Activision Blizzard is valued at more than $13 billion.

Does that mean Zynga isn’t worth the current price people are paying on the secondary market? Perhaps. But there’s no question Zynga is at the center of the storm and has one of the most enviable positions in the game market today. That’s a remarkable achievement, considering EA is more than 28 years old and Zynga is less than four. Zynga’s valuation is not based on current revenues alone, but on its momentum in a fast-growing market. EA doesn’t have that momentum. And DeNA has momentum in the fast-growing social mobile game market in Japan, but it is only getting starting in social games in the U.S.