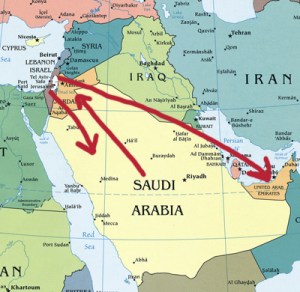 The Middle East has always been a troubled place, and now people are taking to the web to launch their attacks. On Tuesday, a group of Israeli hackers took down the Saudi Arabia stock exchange and the United Arab Emirates stock exchange websites, Israeli newspaper Haaretz reports. The group, which calls itself IDF-Team, was able to paralyze the Saudi stock exchange site and cause delays on the UAE site.

The attack came in retaliation to a group of Saudi hackers, called “nightmare group”, shutting down the Tel Aviv stock exchange website and Israeli airline El Al’s website on Monday. These attacks are part of ongoing occurrences between several groups of Arab and Israeli hackers who have been hacking and releasing Facebook data and email account information over the last few weeks.

One member of IDF-Team took to pastebin to post about the motivations behind the attack and to deliver a warning to Arab hackers:

Because lame hackers from Saudi Arabia decided to launch an attack against Israeli sites such as the airport site “EL-AL” and sites of Israeli banks, today, 01/17/12, Official stock exchange site of Saudi Arabia at the following address http://www.adx.ae not be available online and is only the beginning, in addition there may be disruption to the government’s stock exchange site at the following: http://www.sama.gov.sa/ If the lame attacks from Saudi Arabia will continue, we will move to the next level which will disable these sites longer term may come to weeks or even months. You have been warned.

It looks like the Middle East beginning to wage a cyber war, with both sides ready to release hacked information to the masses. It will be interesting to see how this plays out over the next few weeks; perhaps this is the future of conflict in the Middle East.