At Lightspeed we’ve been investing aggressively in open source software (OSS) businesses for the past 10 years. Recently, we’ve seen a significant increase in entrepreneurs pitching open source startups, and we’ve also seen greater competition for these deals. We pulled together some numbers in an attempt to measure the acceleration in interest in and funding for OSS businesses in the last few years. The results were staggering even to us.

Open source software is clearly growing in popularity. In the past five years the number of dollars invested in OSS companies has increased by almost a factor of 10 compared to the previous five years. But it’s not just VCs and entrepreneurs that are chasing OSS companies; companies of all types and sizes are using OSS in record numbers. This year’s annual Future of Open Source survey, which featured 1,300 respondents, revealed that 78 percent of companies queried are currently running open source software internally. Today, 64 percent say their organizations currently participate in open source projects, up from 50 percent in 2014. This increase begs the question, “Why?”

For 25-plus years, almost all enterprise software created was sold “top down.” Expensive sales reps in fancy suits traveled the globe to wine and dine C-level executives, evangelizing their proprietary software products in an attempt to convert them to a new view of the world. If the reps were successful, CIOs would then “push” the new software purchase down into the organization, where vice presidents and developers would use the software. Or not.

About 10 years ago, a wave of innovative startups arose that had disruptive products AND disruptive go-to-market models that fit with those products. Companies such as SolarWinds, AppDynamics, Splunk, and New Relic built freemium products that were downloadable over the web and provided almost immediate value to vice president- and developer-level IT staff. These companies were radically different because they weren’t footing the bill for expensive sales reps before their products were being used. The freemium product allowed these companies to measure initial engagement, and only once they were certain of interest in adoption would a human attempt to close the customer on a paid, enhanced version of the product. This was much more efficient (read less expensive) than the proprietary, evangelistic approach companies had been using. Open source software businesses are an evolutionary step in this direction.

A disruption in the force

Developers, developers, developers. Remember the passionate (OK, sweaty) monologue from Steve Ballmer? He was right then, but he’s even more right today. In the past two decades there’s been a fundamental shift in decision-making power within the IT organization. Here’s a picture I’ve been drawing in a lot in entrepreneur meetings. It represents how the IT world has evolved and how the best startups have changed their product strategies and go-to-market plans to take advantage of this change: 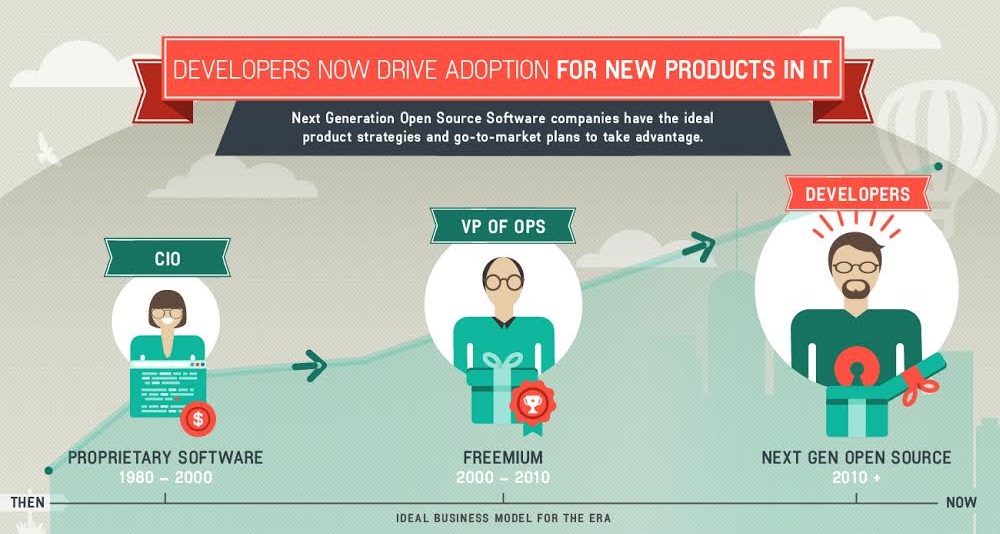 While people at the CIO and vice president of IT level still think they make decisions about what software the company uses, the reality is that developers more than ever hold the keys to the kingdom. Organizations of every kind are under intense pressure to build software better, faster, and cheaper. Developers are being asked to move at lightning speed and build software that scales for the masses. Open source software is brought into IT environments as developers seek to quickly solve new challenges and leverage recommendations from their peers. Usage often spreads quickly within organizations and is firmly established before any vice president or C-level executives are aware. And THIS sets up OSS businesses for the best business model of all.

The best startups sell bibles to the converted

Evangelizing a new religion is hard work, and more importantly it is expensive. But that’s essentially what selling proprietary software is like. Conversely, selling bibles to a group of believers is a lot easier. OSS businesses sell bibles to the converted. Sales people engage an account when they know that the prospect is well down the path of adoption and belief. Often they can engage the account over the phone or through email. This has tremendous positive ramifications for the business long term, as it greatly improves the overall operational efficiency and leverage in the sales model.

But wait; it gets better

In addition to benefiting from the changing tides of developers making more of the decisions within IT and the move to highly efficient sales and marketing over the long term, OSS businesses have other unique advantages. They get product/market fit for free. What does that mean? As I’ve said before, only desperate people who are in pain buy from startups. The number-one job of an entrepreneur in the early days of a startup is to figure out which market segment represents the best opportunity to get a beachhead. So many startups fail because they never figure this out. For a proprietary software company, finding that initial segment requires a lot of guessing. Entrepreneurs have hypotheses about who might be the first type of customer prospect. They spend serious energy seeking people out, interviewing them, and looking for who might be in enough pain to risk working with a no-name startup. Sometimes they find them, mostly they don’t.

OSS businesses turn the customer discovery process completely upside down. Open source software is put into the wild, and the company immediately receives signals from those who are interested. Entrepreneurs get the benefit of real data and usage to help them decide where to focus engineering and sales-and-marketing resources. This is tremendously helpful and important. Data, not guessing, drives prioritization of the limited resources at a company’s disposal.

Open source software is also a cultural fit for modern developers who don’t want to be sold to by some fancy-pants software rep. People prefer to try before they buy. They want flexibility and speed. And they want buy-in and feedback from others just like them. Because open source software is free for anyone to use and view, it’s infinitely more flexible than proprietary software. And as large, active communities build around popular open-source projects, credibility is immediate. The speed at which the code improves and stabilizes is much faster than for proprietary alternatives controlled by a single entity.

So what’s the catch?

Many VCs think that OSS companies don’t make for great investments because they say OSS cripples the companies’ opportunities to monetize. Why would someone pay for software they can get for free, they say? They point to the lack of IPOs as proof for their belief.

Here’s an important thing to understand: Not all OSS businesses are created equal. A good business of any kind needs to demonstrate operating leverage over time. This happens when revenue increases faster than the associated expenses. Businesses that just sell support for an OSS project do NOT have operating leverage. They add people to support the customers they sign up in a 1:1 ratio. They are in fact “people businesses” that have the poor gross and net operating margins to confirm it – and the valuations that go with them.

The OSS companies that will be pillars of IT in the future are the companies that leverage a successful OSS project for sales, marketing, and engineering prioritization but have a product and business strategy that includes some proprietary enhancements. They’ve figured out that customers are more than happy to pay for an enterprise-grade version of the complete product, which may have security, management, or integration enhancements and come with support. And they also understand that keeping this type of functionality proprietary won’t alienate the community supporting the project the way something such as a performance enhancement would.

A wave of OSS companies with successful IPOs is coming. The dynamics within organizations have changed, and developers are clearly calling the shots. World-class entrepreneurs have figured out how to leverage all the advantages an OSS company can benefit from, including finding product/market fit, leveraging the community, and creating a more efficient sales and marketing engine for growth. I’m not suggesting all 31 of the companies that raised about $4 billion in venture capital over the past five years are going to emerge victorious. Some of them haven’t figured the recipe out yet. But in that cohort are some special, highly disruptive, built-for-the-long-haul winners that are going to be the next great pillars of enterprise software. Stay tuned.

John Vrionis has been a General Partner at Lightspeed Venture Partners since 2006 and focuses primarily on early-stage enterprise and consumer technology investments. He has invested in numerous open source software companies including DataStax, MuleSoft, Cloudbees, and Docker. He is also the founder of Lightspeed’s Summer Fellowship Program.