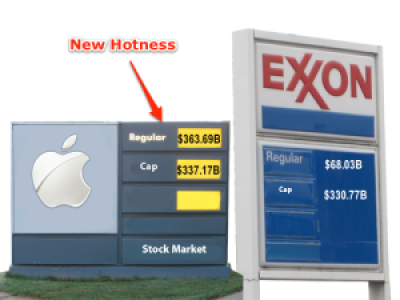 Apple finally overtook Exxon today as the most valuable public company in the world, closing with a market capitalization slightly above the oil giant.

As we noted yesterday, that’s a big milestone in the larger world of computing, and it is a sign that the digital economy is becoming more important in some ways than the physical economy.

Apple became the most valuable company on a day when most stocks were down. The Nasdaq fell 3 percent, as did the Standard & Poor’s 500 index. It isn’t really such a triumphant day in that respect: It’s just that Apple’s stock fell less than Exxon’s did. Following the market’s overall pattern, the stock of the companies fell, rallied in the late afternoon, and then fell again in the last hour or so.

Apple gets no particular advantage out of being the most valuable company in the world, except maybe publicity that will draw even more investors to it at a time of uncertainty. It’s sort of like how we noted that Apple had more cash than the U.S. government. It’s a symbolic milestone more than an actual victory.

Still, Apple’s milestone is worth noting, and it comes in the context of recognizing that there are always winners and losers in the overall economy. Just three weeks ago, Exxon had a $60 billion value advantage over Apple. But after the financial markets crashed, that changed rapidly.

As we said before, this is indeed a changing of the guard. (It’s a nice narrative that fits across the decades, and I’m sticking with it). While Exxon represents the age of oil and the industrial revolution, Apple represents the future. It is the company that has successfully bridged both the computer revolution that just ended and the mobile revolution that is just getting under way. That is why shareholders have rewarded it so handsomely, and why they are likely flocking to the company’s stock as a haven at a time of uncertainty.

W. J. “Jerry” Sanders III, the founder of chip maker Advanced Micro Devices, once said, at the dawn of the electronic age, “We’re the oil of the eighties.” 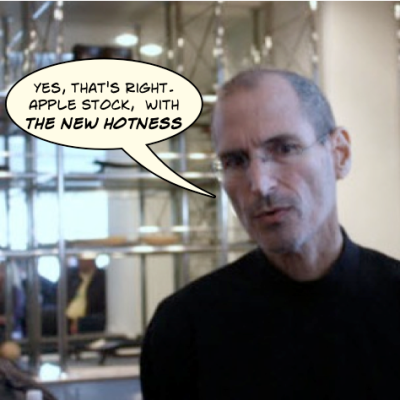 If you think about it that way, this day was bound to come. Oil is the lifeblood of physical goods. But chips became valuable because of the intellectual property contained within them. Apple was one of the prime beneficiaries of the age of powerful computer chips, helping to launch the personal computing revolution in the 1970s.

When Apple launched the iPhone in 2007, it flipped the world on its head, giving chip makers a new priority. Not only did electronics manufacturers have to create powerful computing devices, they also had to make them power efficient so they could run in mobile devices with good battery lives. Apple also launched the age of mobile apps with its App Store and it revived tablet computing with last year’s launch of the iPad.

And all those successes — which are real ones, by the way — helped propel it to today’s symbolic victory.