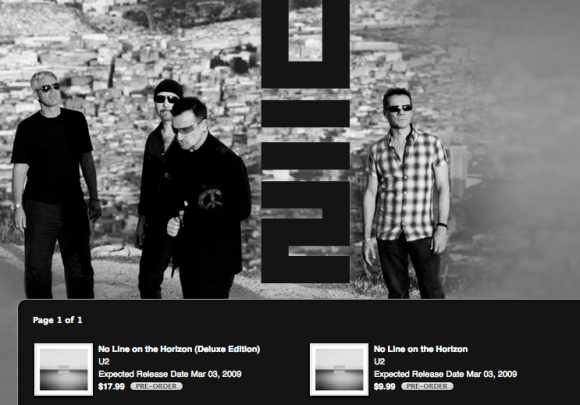 When Elevation Partners, the Silicon Valley private-equity firm that U2 lead singer Bono is a founder of, recently put $100 million into phone maker Palm (it now owns 39 percent of the company), speculation was that there was a falling out between Bono and Apple chief executive Steve Jobs. Apple, which once made a special U2-branded iPod, of course makes the Palm Pre rival, the iPhone. But U2 launched its new single today “Get On Your Boots” from its upcoming album No Line On the Horizon, and it’s only available for purchase one place: Apple’s iTunes music store.

Headlines this morning heralded the fact that the song was being played on radio stations in Dublin, Ireland (U2’s hometown), but you could actually buy it through iTunes at the same time. You can also listen to it streaming for free on U2’s website, but if you want to buy it, for now, you’ll have to go to iTunes [iTunes Link].

Even better, the song is available in the iTunes Plus format, Apple’s DRM-free format. At Macworld a couple of weeks ago, Apple announced that all tracks in the iTunes store would be DRM-free by the end of the first quarter, a big blow to rival Amazon MP3, which previously had the largest collection of DRM-free music online. And even though U2 is promoting the sale of its new album (which goes on sale February 27 in Ireland, March 2 in other countries and March 3 in the United States) through Amazon, that’s for buying the physical CD — the digital album and track are not yet available in the store. The entire album is available for pre-order (both the standard and a deluxe edition) in the iTunes store, though.

So much for that falling out.