SAN MATEO, Calif. — Walking into the electrical substation, I see a green vapor cloud above a circuit breaker. There’s a dangerous gas leak, and immediate action is required. Nearby, a transformer is glowing red: It’s low on oil. Maintenance is urgently needed.

I can almost hear a loud siren wailing and a metallic voice informing me that “this is a test, this is only a test.” But while that’s in my imagination, this is a test. After all, a real gas cloud isn’t green, and a faulty transformer looks the same as one that’s working. But for those who need to spot them in such emergency situations, wouldn’t it be great if they were green and red? For me, right now? They are.

Welcome to Oculus Rift in the enterprise.

Oculus, of course, is the immersive virtual-reality technology created by Palmer Luckey, and subsequently acquired by Facebook for $2 billion. Now, while much of the attention directed at Oculus focuses on how the technology is being used in games and entertainment, some see it as a natural fit for industrial companies looking for ways to solve problems without having people in the field at all times, or for training technicians how to recognize and address problems when they come up.

That’s why I’ve come to San Mateo, about 20 miles south of San Francisco: to see a short VR demo at Space-Time Insight, a 7-year-old startup that’s been developing technology to help utilities and other large industrial clients make sense of the flood of operational data coming in from an ever-growing collection of meters, sensors, and other systems.

But while Space-Time Insight has traditionally worked on 2D software tools, it has seen the future, and recently unveiled an Oculus integration showcasing how virtual reality can be an essential tool in the enterprise.

Strapping on the Oculus goggles, I’m transported to a large utility company operations center. On each wall, I see huge screens filled with maps, charts, and other tools. For the uninitiated, it would be overwhelming. I’m thinking that’s the point — to get people used to what it would be like inside a real-life utility company ops center — when a dot in the middle screen starts flashing red. There’s a problem.

I’m brought into the virtual substation, where I spot the cloud of green vapor. Walking up to it, I see that the gas pressure is dangerously low thanks to the “gas leak.” And nearby, there’s the busted transformer. 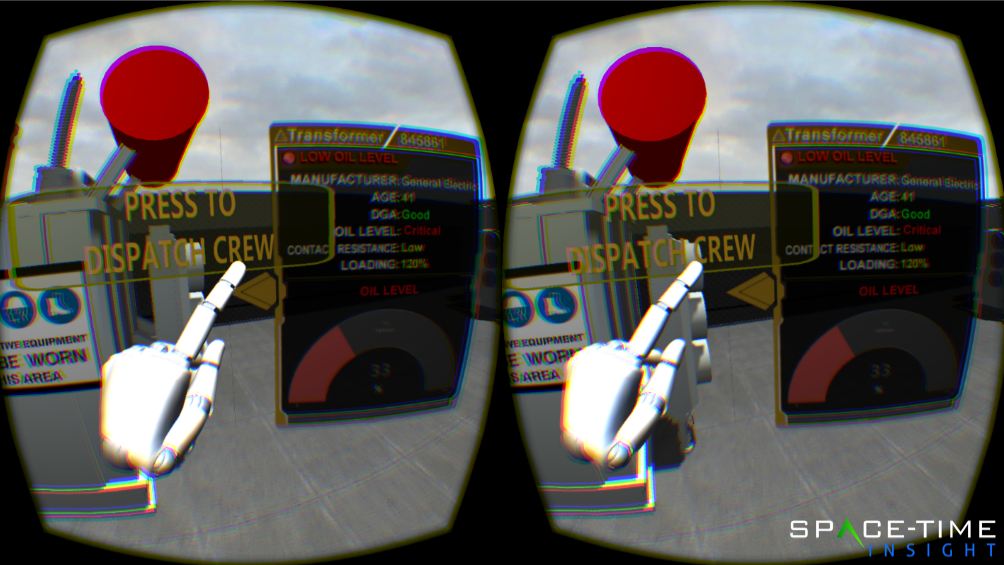 Above: A busted electric substation transformer, in a demo of Space-Time Insight’s Oculus integration.

Here’s the point: Utility companies have installed endless sensors throughout their massive infrastructure, and at any given moment, their systems are processing all that data. When there’s a problem, like a gas leak, it can be found in the data, but how does a human recognize the actual issue, or know how to react when it happens?

Space-Time Insight thinks that VR is a perfect way to analyze issues like these, and that’s why it has developed software it hopes its clients will begin using as they transition into the Internet of Things era.

Steve Erlich, Space-Time Insight’s senior vice president of marketing and product management, explained that its software was designed to process huge streams of data and distill them down to simple visualizations that would make sense to real people.

“Even if you were in a substation,” Erlich said of the gas leak scenario, “you couldn’t see the gas. But based on the data we collect, our analytics can visualize it in a way…a technician” could actually recognize.

The opportunities here are endless, Erlich suggested. Someone in an ops center could be wearing Oculus goggles and walking through a scenario while communicating with someone in the field — leading them directly to a problem. Or, it’s ideal for training, he said.

Today, Space-Time Insight has yet to line up customers for its Oculus integration, but the company thinks its clients are more than ready. Many, he said, have already begun testing the virtual-reality technology and have been looking for just this kind of implementation, even as the world waits for Oculus to move beyond the developer version of its technology and release its consumer version. That day could be coming soon. At the Crunchies — a tech-industry awards show — last week, an Oculus executive said on stage that “We promise one day we’ll ship a consumer product.”

Meanwhile, as Space-Time Insight focuses much of its energy on the utility industry, Erlich said another obvious type of client would be airlines, which could give their technicians a way to virtually inspect planes if a problem arises, either on the tarmac or even in the air. Modern airplanes generate huge amounts of data, and the technology could be used to create instant visualizations of problems. But whether airline, utility company, or other, Space-Time Insight is betting that the enterprise is ready for Oculus, and has even been doing the groundwork that will make the VR technology valuable in the short term. “All of our clients have some sort of 3D model of their infrastructure,” said Zaid Tashman, an engineering product manager at Space-Time Insight, “so it’s easy to integrate with our” software.

To Erlich, this combination is a no-brainer, given that it’s essential that companies be able to take quick action when the data indicates it’s needed. “Right now, if I think about traditional business-intelligence-type tools, you have your dashboards, but what do [you] do with them,” Erlich said. Now, with Oculus, “I’ve got the data, I press a button, and something happens. That has big, big, big business impact.”