iWalk, a startup in Cambridge, Mass., that builds “wearable devices for human augmentation” has announced a $21 million Series B round led by Cambridge-based General Catalyst Partners. GCP partner John Simon has taken a seat on the board, while iWalk co-founder and MIT prof Nicholas Negroponte — most recently known for the XO computer project — has disappeared from the list.

The company’s sole product to date is the PowerFoot One, a computerized, robotic ankle and foot replacement. From iWalk’s one-page catalog:

The PowerFoot was developed partly by MIT professor Hugh Herr. In 1982, the seventeen-year-old Herr lost both feet to frostbite after getting stuck in a blizzard while climbing Mount Washington in New Hampshire. Herr, who still climbs without his feet, led the development of the PowerFoot, which combines an electric motor for muscle with springs that replicate the function of human tendons.

iWalk had planned to make the PowerFoot available last year. I’m waiting to hear back from them on what their projected availability date is now. 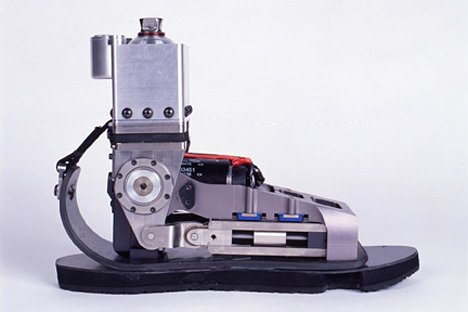