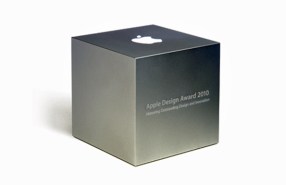 The Apple Design Award is a big deal for software developers. Once a year, Apple hands out perfect cubes of praise to software makers whose wares Apple considers to be the best. The awards are timed to Apple’s annual Worldwide Developer Conference, known as WWDC to coders.

But this year’s awards will only be bestowed upon iPhone OS apps built for the iPhone or iPad. Applications built for the Mac OS X operating system used by all Apple notebook, desktop and server computers aren’t eligible for an Apple Design Award this year.

Macworld writer Dan Moren rounded up responses from experienced Mac developers. “That feels like a snub to plenty of Mac developers who continue to do great work on a well-established, popular platform,” said Paul Kafasis, CEO of Rogue Amoeba, which makes popular audio capture and edit tools for Mac OS X. In the past, award categories have changed to mirror Apple’s current initiatives. But this year, only iPhone and iPad developers are eligible for an award at all.

The dropping of awards for apps that run on Mac OS X, a partly-open-source Unix-based platform, feels like the final nail in the coffin of old niche-market Apple Computer, and the start of a new era for the mainstream consumer electronics maker which calls itself just Apple now.